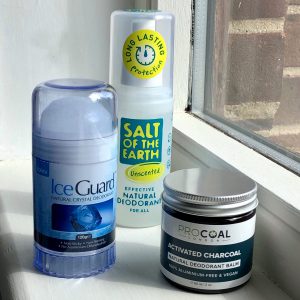 This review first appeared in my weekly email dispatch. You probably already know the difference between antiperspirant and deodorant. Antiperspirant blocks the sweat glands, while deodorant deals with the odour.  I’ve been using natural deodorant since the 90’s. Initially because I found it was easier to travel light with a chunk of salt crystal instead of a can of spray. Then of … END_OF_DOCUMENT_TOKEN_TO_BE_REPLACED