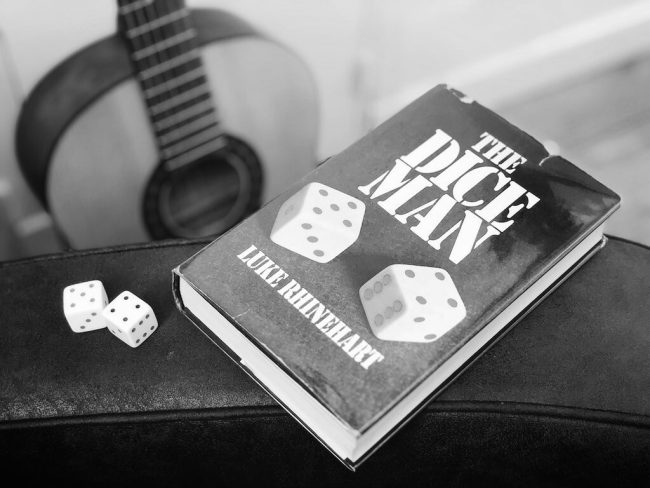 I was still on the Eurostar sliding into Paris when I emailed George.

George Cockroft is one of the personas of Luke Rhinehart. Or is it the other way around? We have been emailing for years now.

My original message had the subject line ‘Accelerated Serendipity’. I’d explained that for nine years the dice accompanied me in over 50 countries. I hobo’d and worked, living in ditches one day and castles the next. Some decisions were my own but it was easier to let chance decide. I wouldn’t have had the adventures if not for my pocket confidence. And I wanted to thank him for the catalyst— his book ‘The Dice Man‘. 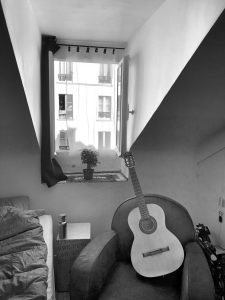 The correspondence continued. He invited me to his place in America but then told me he was to be in Paris. So here I was. Checking into a roof space bedsit in Saint Martin. The kind of tiny apartment you might have seen featured in a cartoon with a talking rat who could cook.

There was no answer to the email. Or a call to his personal phone. I hoped it was tech fail.

A quick Google gave me the address of his scheduled event at the Maison de la Poesie. After a few hours exploring the city I headed over.

The public art space served great wine. At €3 a glass I indulged while mingling with writers, fans and the curious.

George arrived and was politely mobbed to calls of “Luke!” before ushered into the auditorium and then back stage.

Dressed in black he was all smiles under a wide brimmed hat. He was as tall as I’d imagined but also older. Perhaps the tour and the heat were taking their toll.

I secured a front row seat then from around the curtain he appeared flanked by two ladies. The interviewer on one side and translator on the other.

Their professionalism brought out the best in him. In his mid eighties, he was gracious and smart, cheeky and playful. Leaning in at times to cup his ear, he’d tell stories in response to the questions. The translator frantically scribbling notes. He’d pull his hat down to shield his eyes from the lights and only his was grin visible. 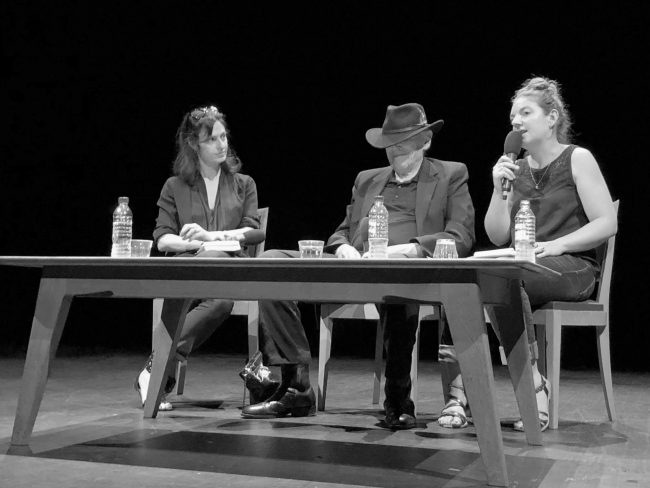 There were many laughs. First as he spoke English. Then the translator Marguerite Capelle would get them again in French.

As well as discussing his books old and new, he spoke about how the roll of the dice introduced him to his wife Ann. Still married 60 years later, she was also in the front row.

He spoke about capitalism and overconsumption. Of how all ideas taken too seriously are dangerous. Of the importance of play and how we need some anarchy to live a full life.
Then came the Q&A and my hand shot up. First, questions from writers looking for tips. Then it was my turn. I asked, in the name of play, experimentation and fun, would George roll the dice right now for the possibility of a gift?

He said yes and I offered two dice and two pouches that I’d packed for the journey. One pouch contained a 1500 year old byzantine die made from mammoth tusk. The other contained a pair of 150 year old George the Third dice carved in bone.

In preparation George stated, “Just don’t tell me what is in the pouch I don’t win… Odds for that one, evens for that.”

Then, with a huge smile on his face he rolled. 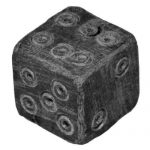 The dice were cast. And to be honest my whole trip was worth that moment. He won the 1500-year-old mammoth tusk die. A treasure I had procured from a Cypriot collector. The intention was always to give it as a gift. I just thought it would be nice to invite chance into the room.

On a few occasions during the rest of the Q&A George would take the die out to look at it. I hoped the gift made him feel younger.

Sat behind me was George’s nephew Peter Lincroft. We connected and filed out to where everyone stood to get their books signed.

I was last in line. It was only on handing George my UK first edition of The Dice Man did he remember me. I was invited to join him and the family for dinner. 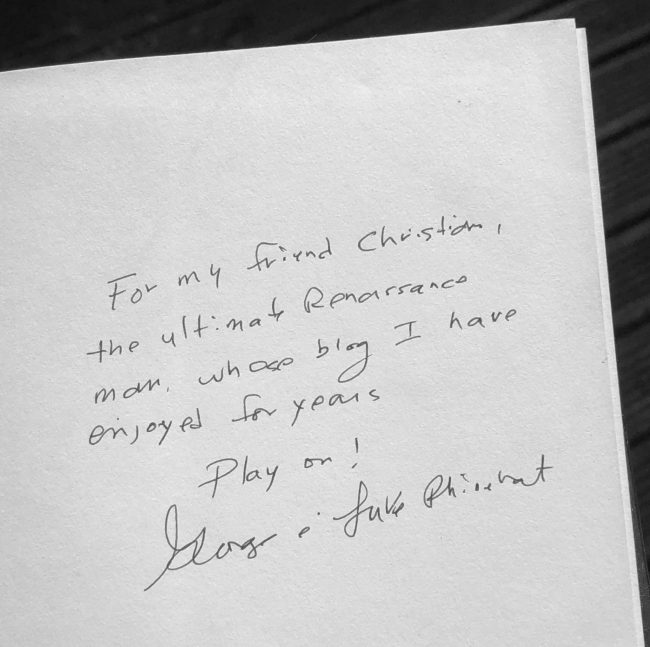 A few members of his immediate family had travelled with him on this European adventure. Some had never seen this side of him. The youngest thought it was time she read his books. This made George smile. As if he’d just administered a little dose of anarchy into someones life.

With whisky in hand he was still signing books as we navigated the cobblestone alleyways. 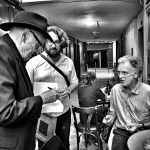 It was a privilege to get to spend time with George, his publisher and family. To talk politics and art, to put the world to rights.

The rest of the evening was spent in a lovely restaurant called Le Quincampe. A dice roll selected me skewered chicken and ratatouille. The Champagne and wine flowed and while sat next to George I got to see a few more personas. The writer, the grandfather, the husband and at the very end of the night… Luke.

Luke Rhinehart got the hint but snatched up his bourbon. “No. I want to stay and drink with my friends.” 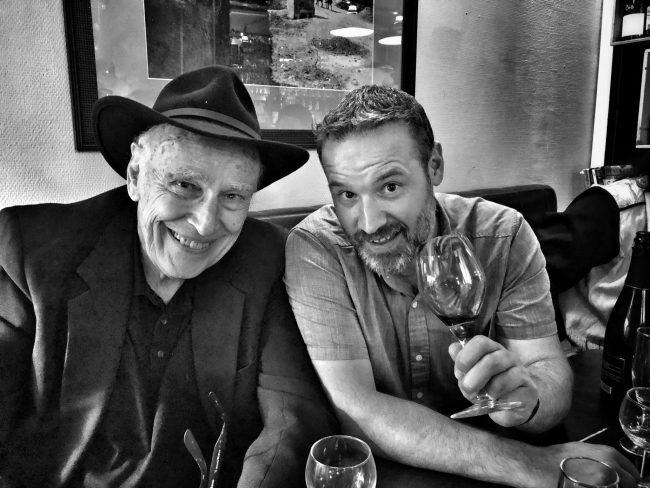 I raised my glass and we chinked. I told him “If I am half as wise, funny and able as you are at your age then I’ve lived a good life.”

And with a raspy farewell and days of interviews still ahead of him, George stepped into a waiting car.

I stood in the street for a bit and remembered I was in Paris. Not wanting the night to end I took out the old bone dice that were now mine.

Odds I’ll head to bed… Evens i’ll spend all my remaining Euros on one last glass of wine. 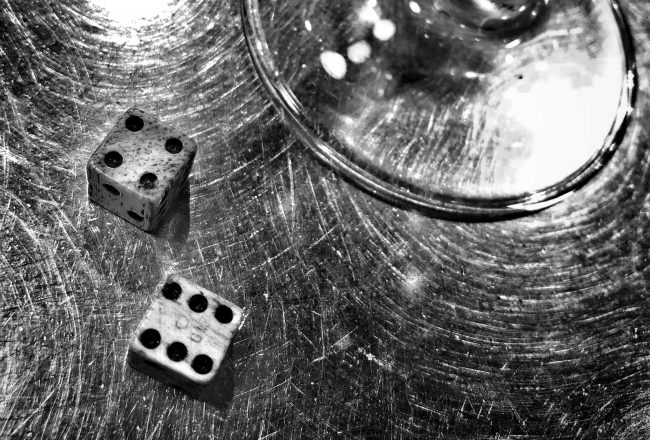 Friday the 29th June I got to spend five hours with George in London. We talked as we walked, as we rode the bus to a meeting at HarperCollins and in a cab to a book signing at Forbidden Planet. At one point we sat in Kennington park and recorded this conversation.

This was originally written for my newsletter. You can subscribe here.