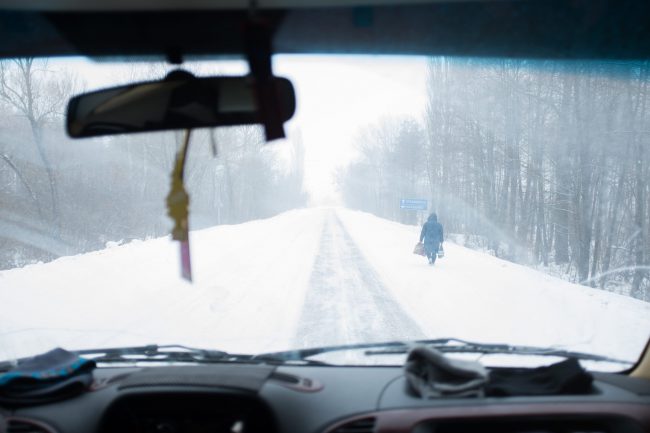 The snow fell hard and Chernobyl was a two hour drive from Kyiv. I’d seen enough dash cam footage from this part of the world to sit staring ahead. Hoping the minibus would stay rubber side down.

My head hurt from a night out before. Not because of the multiple shots of absinthe, but because a part of the drinking game involved being set on fire and hit on the head with a barrel.

And here we were. Heading to a ghost town.

You were not allowed to take photos of the border guards when entering the 30km exclusion zone. Or the next one at 15km. Passports needed to be shown even though this was not an international border. It felt like a glimpse of a future dystopia.

The snow lay thick and barely passable. So much of this area remains untouched. For obvious reasons.

We slid past miles of radioactive trees. Glimpsed elk and heard the howling of either wolves or dogs. Dogs were everywhere. Friendly but not to be touched. The wolves were better hidden. 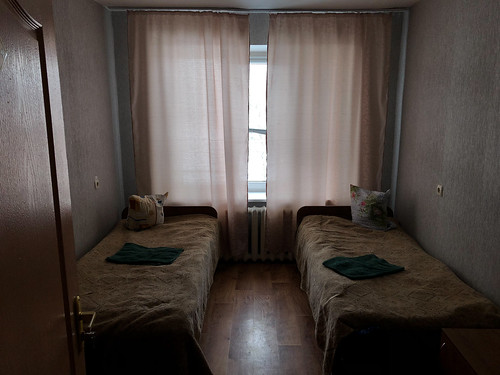 Our accommodation was basic, clean and deathly quiet. If you heard a vehicle it would be the minibus firing up to take us into the abandoned city.
Chernobyl and Pripyat became our strange playground.  Outside the snow crunched underfoot. Inside it was broken glass. We were exploring some places we shouldn’t have been in. The sight of collapsed floors gave a warning as we stepped into buildings vacant for 32 years. Void of life.

The population wasn’t snuffed out. It was forced to leave after the worlds worst nuclear accident. Only one person died on April the 26th 1986. Another 28 inside four months. Many more would follow as the caesium, plutonium and strontium spread around the world. 115,000 local people were evacuated. But this was a global incident. A non-government body called the ‘Chernobyl Union of Ukraine’ estimates the present death toll from the disaster at around 735,000. All because of human error. 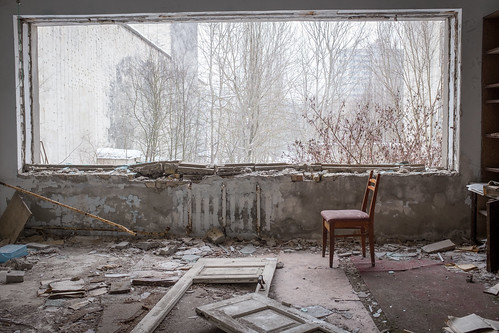 It was hard to get your head around the figures. So you didn’t. Instead you explored the crumbling buildings and stairwells. Peered into homes left to rot and stole images in the hope you could offer others a glimpse into this strange world. 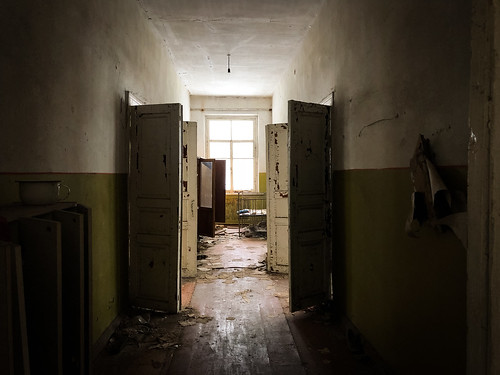 Aesthetically it was tragic and beautiful. In some spaces you felt like the first visitor since the evacuation. In others you would have the feint recollection of having seen the place before. And you may well have. Much of this place has been photographed, inside and out. It is forbidden for anything to be removed from the city. Yet inside the desolate buildings it was obvious previous visitors had tampered with the toys and detritus. A doll head turned, a respirator hung, a poster unfurled. Photographers setting scenes in a giant diorama. 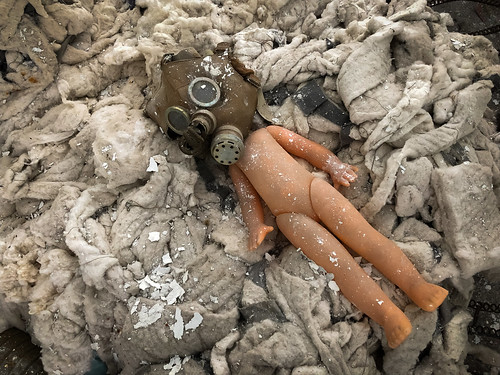 Outside it’s different. The woodland sprouts through the city. Evolving all by itself. Slowly reclaiming the streets and structures. The snow not only protected us from radioactive dust, it reflected light into the darkest corners.

And life is returning.

You could see the tracks of animals weaving between the trees. The area won’t be safe for human habitation for 20,000 years but there are over 60 different mammals roaming wild. Perhaps a little mutated, certainly off the menu. 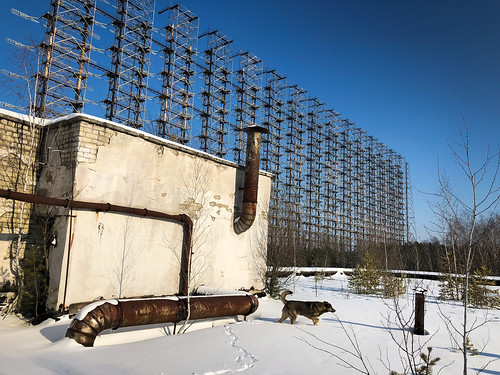 The group I travelled with were a varied bunch. Building, banking and law featured in their normal lives and here we were. Set loose in a ghost city. Armed with Geiger counters and cameras. Navigating radioactive hotspots one minute and gaming the highest reading the next. The background clicking added a strange drama, excitement even. At one point a steel demolition claw we approached measured over 111 MilliSieverts. The clicks turned into electronic screams and your heart raced. It’s exciting and terrifying to be warned of an invisible threat. Not unlike the ground rush in a bungie jump when your eyes are closed. You hold your breath knowing only too well it won’t help. I was keen not to spend too much time in these spaces.

Towards the end of the day, as the sun dipped in broken windows we stood silently in Pripyat hospital. Decades before, in the cellar beneath our feet the first responders took off their safety equipment. It had laid there ever since. Our guide told us the boots, helmets and gloves had recently clocked a reading of over 800 MilliSieverts. A stark reminder of what the fire crews and workers had been exposed to decades before. 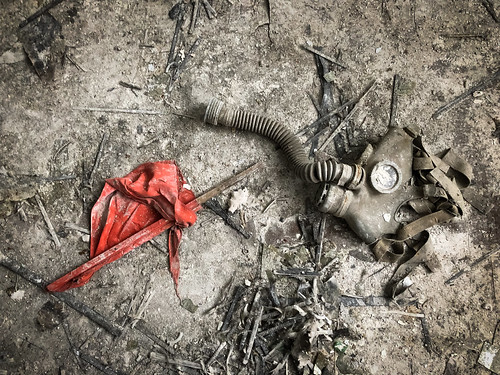 In the evening we visited a small restaurant that was keen to feed us as quickly as possible. The room doubled as the local bar and with a city wide 10pm curfew we were not going to get in the way of peoples drinking. Especially as we were already flaunting, opening and downing bottles of Ukrainian wine. By far the strangest wine tasting i’ve experienced.

We were back in our rooms by 9:30pm. Well prepared for the curfew. We’d stocked up with the remaining wine, snacks and other drink from the one corner shop. Not sure if our guide was joking, but he said the local residents believe vodka protects them from the effects of radiation. Even with the inflated prices in the exclusion zone, vodka costs less than three Euros a bottle. It may not protect you, but everyone can afford not to care.

We drank everything. All the wine, all the beer and a bottle of strange liquid masquerading as whisky. 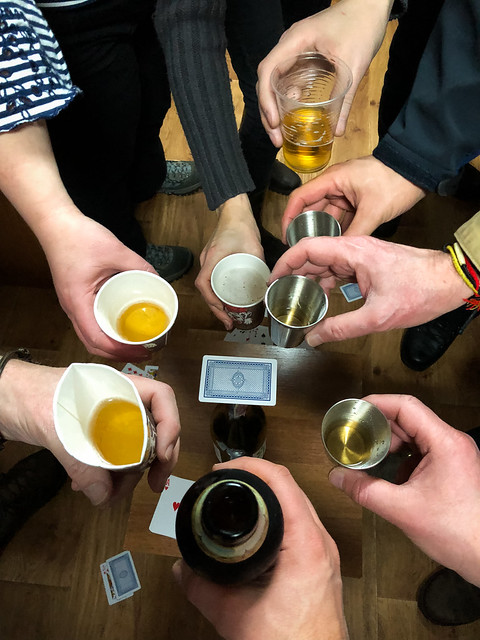 The following morning we were back out in the streets. Exploring in -18 degrees and making the most of our time. This was the day we discussed the sadness of this incredible place. The displaced lives still affected and what is still to come.

It may take another 100 years to decommission the power station.

We humans are strange folk. 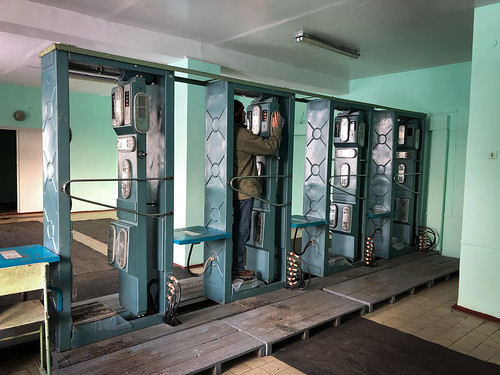 We were screened for radiation twice while leaving the exclusion zone. Not yet out of danger, we still had the long icy drive back to Kyiv.

There’s talk of the cursed ground being used to process and store nuclear waste from other power stations. On top of the land they are already experimenting with the building of a huge solar farm. I mean why not. It’s not like the land can be used for much else. 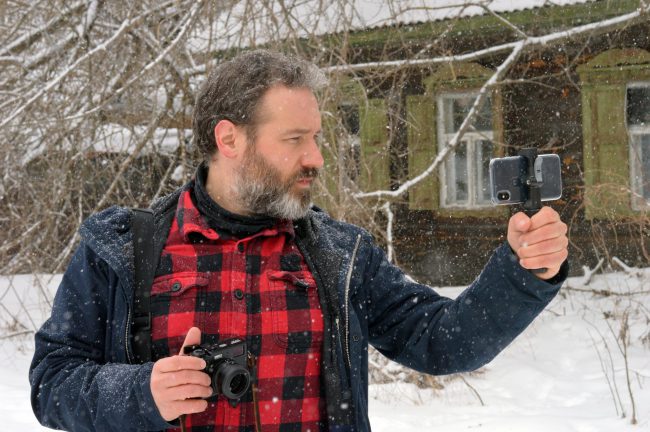 Some of these words first appeared in my newsletter. You can subscribe here http://documentally.com/newsletter

Thanks to Smiling Grape Adventure Tours for getting me into Chernobyl and to VodafoneUK for sponsoring my data and keeping me connected while I was there.

If you like, you can buy me a coffee here… http://buymeacoffee.com/documentally