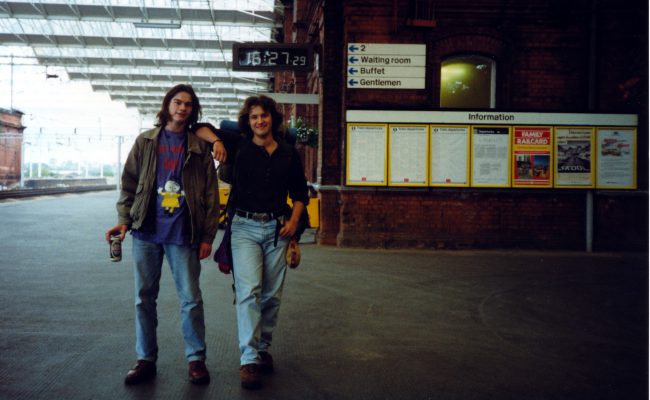 I was 19 years old.  Curious and adrift.  No thoughts for the future. I would never have imagined that twenty five years later, to the day, I’d be alive.  Let alone pondering that moment.  Stood on the platform of Rugby train station with Dave.

Armed with Inter-Rail tickets we were off to explore Europe by train.  No plans, a bit of cash and no clue as to what was in store.

I kept a journal.  The scrawlings of an excited teenager.  Unaware that this four week trip would seed a wanderlust that would last nearly ten years.

Seventeen minutes and thirty seconds after this photo I wrote my first journal entry.

On a train. To who knows where.

After leaving a sodden Rugby behind us, you’d think we’d be contemplating adventures that lie ahead. The mystery, the intrigue, this voyage into the unknown.

Alas no. It’s only been fifteen minutes and we are already letching. It must be some kind of metaphysical phenomenon, strange indeed that the opposite sex always look more attractive when away from home. Maybe it’s just being surrounded by new and intriguing faces. No offence intended to the population of my home town. It’s just that you find in our small social orb, that if you don’t know someone, you almost certainly know their friend’s. This, for me anyway, tends to taint the initial process of getting to know someone. The mystery is lost. Plus, when away from home if you ever get bored of being yourself, you can quite easily slip into a totally new character and not worry about repercussions.

Anyway, back on topic. In between sups from my can of bitter and in fact also during, I’m sat on a train bound for London Euston. My train seat doesn’t seem to be connected to anything and most of the people in this train carriage look like they are off out on the town.

“Mention the train is only going three miles per hour” adds Dave, disturbing my train of thought.

Sat across from me wearing a limited addition, (there’s only one), Bod T-shirt, is Dave Deeley. My travelling companion and college chum. Dave is a little taller than me, a little skinnier than me. We both have brown shoulder length hair but his is straight and mine, well let’s just say it looks like I borrowed it from a 70’s rock star. At least that’s what I’ve been told.

Say Hi! Dave.
“Hi!”
Notice the neatness of the handwriting even though we are rocking and rolling. (Neatness only noticed in original copy). Dave is a Brummie, but I tell him every one of us has something we are ashamed of and not to worry about it.

This is our first Inter-Rail trip. Our first trip together. Our first unplanned expedition into mainland Europe. If you look at how much I have packed this may look obvious. I can’t speak for David but I feel like I am ready for anything.

There’s something beautiful in the moment of placing the first dark marks across the fresh front page of a school exercise book. I failed to notice this when I was actually in school. It gives me great satisfaction to think that the entire contents of this notebook will be solely my reflection.

I’m keeping this journal to record my feelings and actions whilst I travel. I also hope it will give me a few extra moments where I can digest and contemplate the external sensations affecting me. An added bonus might be that the casual observer mistakes me for an intellectual.

The whole train journey has run like clock work, (so far-touch wood!) from Euston to Victoria, to Dover, (after changing at some a station I forget.) Due to an overcrowded train at Euston, we got to travel in the break van. Some might think this an inconvenience, but for me any deviation from the norm is most welcome. The tiny oil scented carriage was packed with an array of buttons and lunch boxes. Today though, it was also graced by commuters from all walks of life. Ties off and top buttons loosened. Many seemed to know each other and looked as if engaged in a party of all things. We tried to guess the backgrounds of some of the individuals. Dave thought one guy was a copper. Later though, in a conversation we heard him say, “treat everyone as equals.” This threw us. The others were various alcoholic office staff, hard at practising their hobby, serious drinking. The stress and strains of working in London must really be bad if you have to get pissed on the ride home. Anyway, we left them to it and continued our journey gazing out of a single small window upon other, more sober, passing lives.

Our only delays were at Dover, once for the bus, twenty minutes, and once at the docks, approximately one and a half hours. We were too busy still buzzing to notice such minuscule halts in our momentum. One weird happening was that Dave just happened to meet a friend of his, the term ‘friend’ used loosely. He knows this guy from back home. He looked like a complainer so I kept away. Dave tried to escape from his depressive conversation as soon as was possible. Now we are sat waiting to set sail, or at least to cast off as I believe P and O ferries have stopped using sails nowadays. It’s almost 11pm. As we sink into the first comfy seats of this journey we are rustling up the energy and the funds to purchase a bottle of Jack Daniel’s. 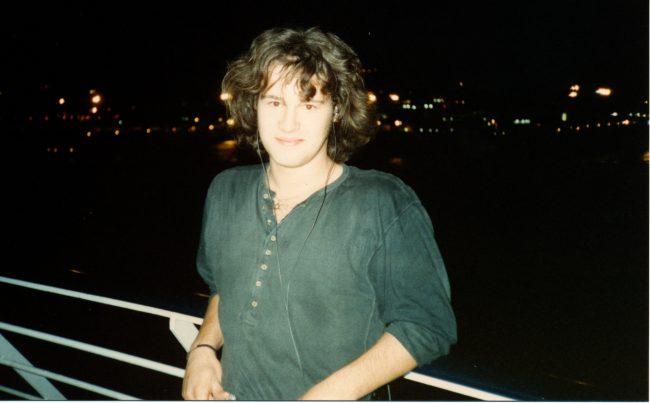 As you would imagine the next twenty seven days were filled with firsts.  Adventure will do that.  Dave didn’t make the whole month and I spent a chunk of it travelling alone.  We suffered at the hands of the Spanish police. I was rescued one night by Czech law enforcement.  Later in the trip I thought it would be a good idea to send a postcard from a war zone and was once again rescued.  This time by an old man and a horse.  The wine canteen you see hanging from my belt featured heavily.  A moment I cherish.  When I think back it was a cinematic moment.  I’m hoping this is one of the last memories I lose.

Ultimately I’d like to compile this trip into an small book.  Although I might need to look at the legality of sharing some of these stories.  In the meantime I’ll share a few more moments in my Newsletter.  If you have not subscribed because you think I’m trying to sell you something click on this link and read what some kind folk have said about my weekly posting… http://Documentally.com/backchannel  It’s mostly harmless. Honest.

Risk, sweat, trust, hangovers, pain and friendship.  I didn’t realise that this trip was an adventure till it was over.  Reading my journal I’m only just realising the effect this time had on me.  Twenty five years later.

It’s hardly a work of art but I’m glad I started it.  And the many journals that came after.  They are portals to the past.  A two dimensional time machine that can drop me into a moment of reflection, discovery, change.

Travelling got addictive.  I’m not sure If I never thought of the future or just never thought I would see it.  My inner voice would narrate over the occasional near death experience with “I told you so.” Only to have to retract the sentiment when a death defying incident became just another story.