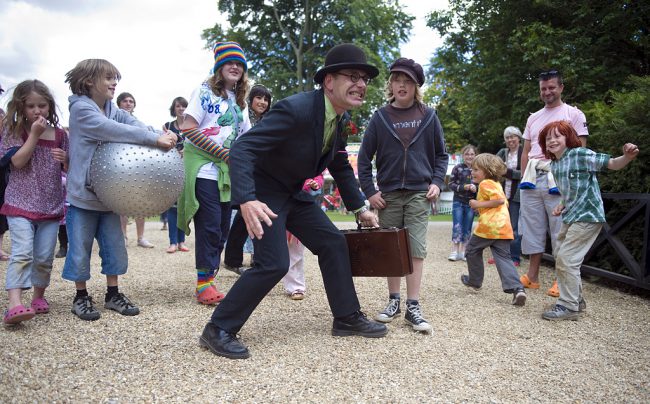 The world is crazy for ‘AR’ right now. ‘Augmented Reality‘.  The real time integration of digital information with a user’s environment.  Some say we’re on the edge of mass adoption.

The focus is on the visual.  Yet audio is a key component of both augmented and virtual reality.  As interested as I am by today’s limited offerings, little has impressed me as much as when my own reality was augmented with audio.

I first saw Edmond Tahl in 2008. I was stood in a field at the Larmer Tree Festival.  A man dressed with bowler hat and briefcase strolled past.  His footsteps boomed in the mud like bad film foley.  He took a drinking straw from his pocket and slurped someones pint loud enough for the whole field to hear.  Then he leaped, as a scream and a thud had us looking for the falling body he’d just sidestepped.

I couldn’t help but follow him through the crowd.  For the next thirty minutes he augmented our reality with sounds.  Swarming bees, wild animals, breaking glass and gunfights.

The world within earshot of his performance was transformed.  A mime artist and his bizarre soundtrack. Grownups stared in disbelief.  Kids followed this pied piper.  Laughing, running, playing along.

It seemed impossible that his small briefcase could produce this audio-scape.  The sound quality was amazing.  I could see holes for a small speaker but saw no switches or buttons.  A seamless performance.

When I asked ask him how he did it he just tapped his nose.  At that point a lion roared, we both jumped out of our skins and he ran off.

By far one of the of the best street performers I’ve met.

So I just googled Edmond Tahl.  I found the guy behind that performance and many more.  His name is Nick Warburton. Nick’s company is called Stuff & things. After sixteen years Edmond Tahl has sadly been retired.  No longer to distort a reality near you.

Nick mostly builds audio solutions for others now.  High spec custom tech for street performers, musicians and sound installations.  I just gave him a ring. We talked for ages. I’ve finally discovered the secret technology behind the man in the bowler hat.

Is Augmented Audio Reality next?

I blog sporadically, but write weekly in my newsletter ‘Backchannel’  SIGN UP HERE