The month of June is upon us and on the 25th I’ll be heading to Oxfordshire for a picnic beside the grave of Eric Arthur Blair.  This will be the eighth year running where a number of us have made the pilgrimage to share in a conversation on George Orwell’s birthday.

A mini informal symposium. A chat around mass surveillance, consumer data and our civil liberties. Accompanied of course with food, drink and the hashtag #1984Symposium.

If you are ‘free’ to join us on the 25th of June here is the the where, when and how:

This year, I thought I’d curate a small reading list of surveillance themed books. [At the bottom of this post.]

Some easily available. Others you may not have heard of before or not on general release.

If you have any personal recommendations you’d like to add, please leave them in a comment below.

Here is a selection of audio recorded at Orwell’s graveside over the years.

Let me know if you plan to attend.  It might be you want to get stuck into some of the titles below and we can discuss on the day.

No Place To Hide: Edward Snowden, The NSA And The Surveillance State by Glen Greenwald 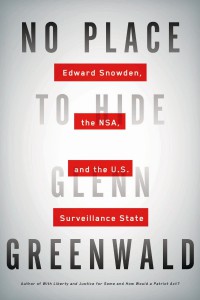 “This is the inside account of the events documented in Laura Poitras Citizenfour. Glenn Greenwald’s No Place to Hide is the story of one of the greatest national security leaks in US history. In June 2013, reporter and political commentator Glenn Greenwald published a series of reports in the Guardian which rocked the world. The reports revealed shocking truths about the extent to which the National Security Agency had been gathering information about US citizens and intercepting communication worldwide, and were based on documents leaked by former National Security Agency employee Edward Snowden to Greenwald. Including new revelations from documents entrusted to Greenwald by Snowden, this essential book tells the story of Snowden and the NSA and examines the far-reaching consequences of the government’s surveillance program, both in the US and abroad. “The first thing I do when I turn on the computer in the morning is go to Glenn Greenwald’s blog. He is truly one of our greatest writers right now.” (Michael Moore). “The most important voice to have entered the political discourse in years.” (Bill Moyers). Glenn Greenwald is the author of several US bestsellers, including How Would A Patriot Act?, and A Tragic Legacy. Acclaimed as one of the twenty-five most influential political commentators by The Atlantic, Greenwald is a former constitutional law and civil rights attorney. He has been a columnist for the Guardian since August 2012 and his work has appeared in numerous newspapers and political news magazines, including The New York Times and the Los Angeles Times.”

Data and Goliath by Bruce Schneier 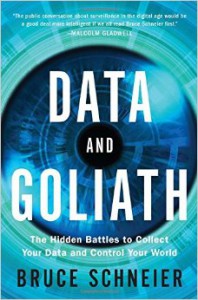 “Your cell phone provider tracks your location and knows who’s with you. Your online and in-store purchasing patterns are recorded, and reveal if you’re unemployed, sick, or pregnant. Your e-mails and texts expose your intimate and casual friends. Google knows what you’re thinking because it saves your private searches. Facebook can determine your sexual orientation without you ever mentioning it. The powers that surveil us do more than simply store this information. Corporations USE surveillance to manipulate not only the news articles and advertisements we each see, but also the prices we’re offered. Governments USE surveillance to discriminate, censor, chill free speech, and put people in danger worldwide. And both sides share this information with each other or, even worse, lose it to cybercriminals in huge data breaches. Much of this is voluntary: we cooperate with corporate surveillance because it promises us convenience, and we submit to government surveillance because it promises us protection. The result is a mass surveillance society of our own making. But have we given up more than we’ve gained?In Data and Goliath, security expert Bruce Schneier offers another path, one that values both security and privacy. He shows us exactly what we can do to reform our government surveillance programs and shake up surveillance-based business models, while also providing tips for you to protect your privacy every day. You’ll never look at your phone, your computer, your credit cards, or even your car in the same way again.”

Dragnet Nation: A Quest for Privacy, Security and Freedom in a World of Relentless Surveillance by Julia Angwin 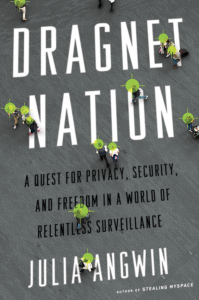 “We are being watched. We see online ads from websites we’ve visited, long after we’ve moved on to other interests. Our smartphones and cars transmit our location, enabling us to know what’s in the neighborhood but also enabling others to track us. And the federal government, we recently learned, has been conducting a massive data-gathering surveillance operation across the Internet and on our phone lines.
In Dragnet Nation, Julia Angwin of The Wall Street Journal reports from the front lines of America’s surveillance economy, a revelatory and unsettling look at how the government, private companies, and even criminals use technology to indiscriminately sweep up vast amounts of our personal data.

In a world where we can be watched in our own homes, where we can no longer keep secrets, and where we can be impersonated, financially manipulated, or even placed in a police lineup, Angwin argues that the greatest long-term danger is that we start to internalize the surveillance and censor our words and thoughts, until we lose the very freedom that makes us unique individuals. Appalled at such a prospect, Angwin conducts a series of experiments to try to protect herself, ranging from quitting Google to carrying a “burner” phone, showing how difficult it is for an average citizen to resist the dragnets’ reach.”

The Black Box Society: the Secret algorithms that Control money and Information by Frank Pasquale 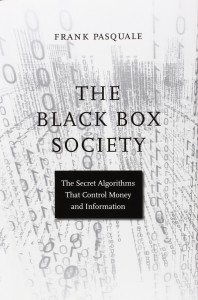 “Every day, corporations are connecting the dots about our personal behavior silently scrutinizing clues left behind by our work habits and Internet USE. The data compiled and portraits created are incredibly detailed, to the point of being invasive. But who connects the dots about what firms are doing with this information? The Black Box Society “argues that we all need to be able to do so and to set limits on how big data affects our lives. Hidden algorithms can make (or ruin) reputations, decide the destiny of entrepreneurs, or even devastate an entire economy. Shrouded in secrecy and complexity, decisions at major Silicon Valley and Wall Street firms were long assumed to be neutral and technical. But leaks, whistleblowers, and legal disputes have shed new light on automated judgment. Self-serving and reckless behavior is surprisingly common, and easy to hide in code protected by legal and real secrecy. Even after billions of dollars of fines have been levied, underfunded regulators may have only scratched the surface of this troubling behavior. Frank Pasquale exposes how powerful interests abuse secrecy for profit and explains ways to rein them in. Demanding transparency is only the first step. An intelligible”society would assure that key decisions of its most important firms are fair, nondiscriminatory, and open to criticism. Silicon Valley and Wall Street need to accept as much accountability as they impose on others.”

The Silent State: Secrets, Surveillance And The Myth Of The British Democracy by Heather Brooke 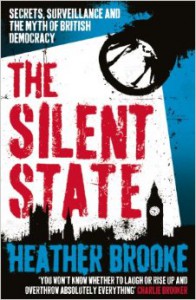 “Award-winning investigative journalist Heather Brooke exposes the shocking and farcical lack of transparency at all levels of government. At a time when the State knows more than ever about us, Brooke argues that without proper access to the information that citizens pay for, Britain can never be a true democracy. Secrecy: anonymous bureaucrats, clandestine courts, men in tights and the true cost of ‘public’ information. Propaganda: spin, PR and bullshitting by numbers. The British government spent GBP38m more on advertising last year than their closest competitor, Proctor and Gamble – find out what they spent it on! Surveillance: discover the extent of Britain’s network of databases spying on ordinary citizens. Expenses: read, for the first time, the exclusive and definitive account of Brooke’s five-year campaign to have MPs’ expenses revealed, which rocked the nation and transformed Britain’s political landscape.”

The Private Security State? Surveillance, Consumer Data and the War on Terror by Kirstie Ball & others. 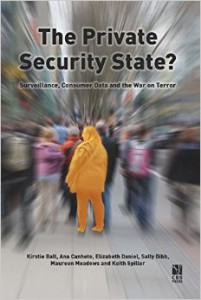 “When businesses are required to send customer data to government, their systems and their employees become part of a wider security framework. Their commercial activities become shot through with insecurities and they are placed in a kind of double jeopardy: a failure to address these regulations can result in both national and commercial insecurity. The Private Security State? is the first full-length academic text to address the enrolment of the private sector in national security surveillance regimes. Through detailed empirical analysis, it questions how private organizations achieve compliance with demands for customer data. The book revolves around case studies of two public-private surveillance regimes: Anti-Money Laundering/Counter Terror Finance in retail financial services and the EBorders in the retail travel industry.” 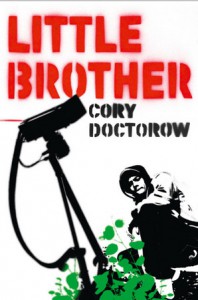 “The ultimate tale of teen rebellion – one seventeen-year-old against the surveillance state. Big Brother is watching you. Who’s watching back? Marcus is only seventeen years old, but he figures he already knows how the system works – and how to work the system. Smart, fast and wise to the ways of the networked world, he has no trouble outwitting his high school’s intrusive but clumsy surveillance systems. But his whole world changes when he and his friends find themselves caught in the aftermath of a major terrorist attack on San Francisco. In the wrong place at the wrong time, Marcus and his crew are apprehended by the Department of Homeland Security and whisked away to a secret prison, where they’re mercilessly interrogated for days. When the DHS finally releases them, Marcus discovers that his city has become a police state, where every citizen is treated like a potential terrorist. He knows no one will believe his story, which leaves him only one option: to take down the DHS himself.” 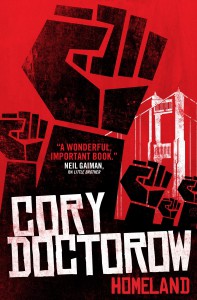 “Marcus Yallow is no longer a student. California’s economy has collapsed, taking his parents’ jobs and his university tuition with it. Thanks to his activist past, Marcus lands a job as webmaster for a muckraking politician who promises reform. Things are never simple, though: soon Marcus finds himself embroiled in lethal political intrigue and the sharp end of class warfare, American style.” 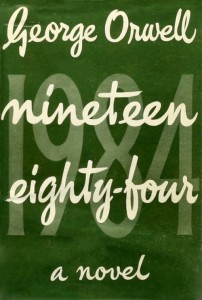 “Classic / Winston Smith lives in a society where the government controls people’s lives every second of the day. Alone in his small, one-room apartment, Winston dreams of a better life. Is freedom from this life of suffering possible? There must be something that the Party cannot control something like love, perhaps?”

Please leave any of your book, film or documentary recommendations in the comments below.