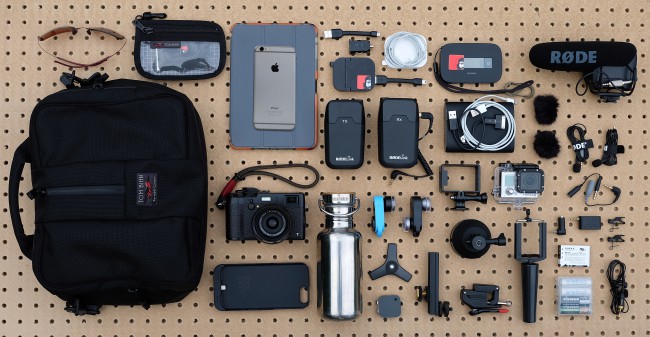 The following kit list is what I packed before heading up to Gateshead for Thinking Digital 2015. Some of these links below are Amazon affiliate links. Please don’t purchase anything on a whim. Read other reviews first.

I’m not saying all this gear is what you would need to document an event. It’s just some of the kit I’m having fun experimenting with. There are also some multiples as I try to discover what works best as I continue to hone my workflow.

Truth be told, I often work better with just a smartphone and battery.  There’s less to think about.  You are pushed to be creative with the simplicity of a standard lens.  Although there is still the danger of getting lost in the million apps at your disposal.

Working with just a smartphone might be a challenge at times but it’s also better for the environment.  Should you need to expand your kit, I hope this list will help you to make some informed choices.

So for starters, think about investing in the best smartphone with the largest internal storage you can afford. And of course a battery.

I went for the iPhone 6 128GB. I’ve used the iPhone for a number of years now. Once accustomed to iOS and the apps on offer, it’s hard to change. I have also quickly learned that the more internal storage the better. Besides wanting to carry my music collection with me, I’m shooting a lot of video and anything less that 128GB starts to fill up fast.

I went for the standard iPhone 6 as I like to have my phone at the ready in my back pocket. It’s also easier to find a tripod mount for the smaller sized device. I’m sacrificing a little video quality as the 6 Plus is certainly better, but the standard 6 is more than enough for my current needs.

Capturing multimedia eats battery power. You will find you’ll need to charge your phone battery halfway through the day. If I am near a wall socket i’ll use the 2.4 amp Mu Tablet Charger for a faster charge. I also carry a Mu Duo incase I need to simultaneously charge my mifi, portable battery or camera. In between jobs i’ll use my hefty Anker astro 3 battery pack. Or if I find I need to charge while documenting the TYLT Energi rechargeable phone case enables me to drop my phone into a charging sleeve. No more dangling cables.

On occasion I’ve found myself traveling by car or taxi between venues and events. Packing a small Griffin Power Jolt Micro in-car USB adapter takes up little space and saves me dipping into my own battery power.

Having business cards on me is still very relevant. I’ll often get asked for group or one to one training or if i’ll document a specific event. I keep my cards in a Tom Bihn organiser pouch with some Moo Stickers. We engage with so many people on a day to day basis and rarely put the faces to the avatars. I use the stickers on my conference pass as a visual indicator to my online identity. 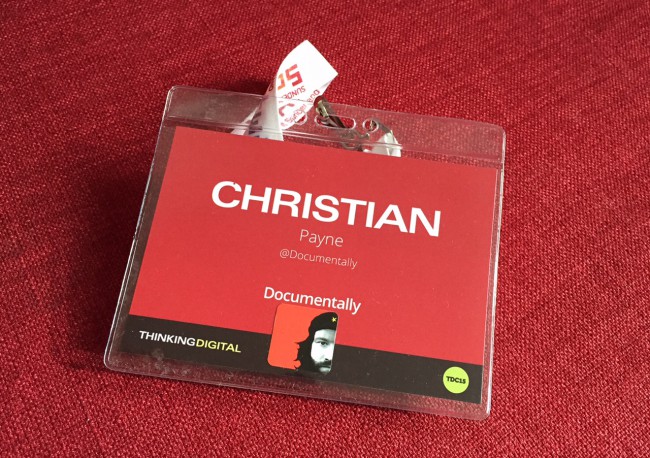 An iPad Mini helps me to spread my tweeting between devices. It’s also easier to scan the hashtag, view lists and compose tweets. All in a few swipes of the screen. It’s also handy to have when my phone is charging.

Although conferences are delivering better wifi I still like to have my own data connection outside of the sim in my phone. I pay £8/month for an extra 5gb of data that sits on a sim in an Unlocked MiFi I’m also able to drop a local sim in should I need data abroad. If I can’t get 3 or 4G on my phone I’ve found that hanging my mifi in a window will get me a better connection deeper into a room.

It’s easier than ever to share high resolution images between your camera and your phone. The most capable compact camera I have is the FujiFilm X100T. I wonder how I ever managed without a networked high resolution camera. The larger sensors will beat any mobile device in low light. The aperture control enables me to grab more artistic documentary shots.

I’m packing quite an array of audio gear. All by Rode. Some I have yet to really get to grips with. I’m amazed at the freedom offered by the RodeLink Filmaker kit. I found that by holding my phone on a handle mounted grip with a hotshot rail, I could create a mini rig. On this I can mount the Rode link receiver while attaching my Rode Lavalier and transmitter to myself or a subject. This way I can shoot pieces to camera at quite a distance. I’ve heard that too many wireless devices between the sender and receiver can produce interference. My initial tests have not noticed any issues at quite an amazing range.

If I want to film people and not have the hassle of clipping a mic on and off, I can mount the Rode Video Mic Pro alongside my phone. It packs a high quality punch for it’s size. I’ve used the last version on my larger GH1 3 and 4 camera for a while, but this is the upgraded latest version (released May 19th 2015). I use a Rode SC3 adapter to change it from a TRS to a TRRS connector and another adapter, thick TRRS to thin TRRS adapter so it slots through my phone case. The new Rode Video Mic Pro does a great job of capturing rich sound be it music or speech. The noise floor is low and there’s none of the tinny hissing you can get through the iPhone mic.

The phone clamp I was using suffers a loose rubber clip on the top and after replacing it a few times i have now opted for the Joby GripTight Mount. It folds flat and is much better made.

Yet to properly experiment with my hacked together mini iPhone rig. Brought the new Røde Videomic Pro to #TDC15 pic.twitter.com/QVyRvG5qub

If I want to mic up myself and one other I’ve a super compact interview kit. This comprises of two Rode Smart Lav’s +, windshields and an SC6 adapter that enables them both to be pugged in to the phone for audio or video. If you are recording audio through the Rode record app you can monitor your levels through headphones.

I have a couple of other device clamp and mounts in case I need to leave a GoPro or the iPad mini shooting time-lapse. One is a handy universal phone mount designed by Nokia attached to a mini Manfrotto tripod. Then there’s a flat camera stand from the Zoom H2 kit.

I have the GoPro Hero 3 with waterproof and open case and a nifty GoPro SceneLapse Time-lapse mount. This little clockwork mount works great with the iPhone and offers a moving time-lapse video effect. Like in the opening of this video below which was shot and edited on the iPhone using the new Rode Video Mic Pro.

I never zoom on the iPhone. It eats up valuable pixels. The Olloclip fisheye, wide angle and telephoto iPhone lens adapters are super handy to get you out of a tight spot. The wide angle means you can get more people into frame closer to the phone improving compensation and audio capture. While the telephoto adapter means you are cropping less of your images when trying to get close to the action. Hands when not sat at the front of an event. Both lenses offer a macro option should you want to get in super close. I do find them a little fiddly as I need to remove my phone case before attaching them. This may be solved with their new case but won’t help me with my current battery case.

All this talking and image making is thirsty work so for rehydration on the move I have my trusty 18oz Klean Kanteen. No more plastic bottles.

For some reason I also have my Maui Jim Sun Glasses. Probably to hide those morning after tired eyes rather than to offer any protection from the sun’s glare.

My Jabra Revo headphones live round my neck as all this tech fits nicely into my trusty Tom Bihn Co-Pilot. The bag itself has done many thousands of miles and still feels bomb proof. It has just enough compartments to organise and not confuse and will hold a bottle of wine if you would rather that than water.

Now. This is what I’m packing but isn’t necessarily what I take out on every day of a conference. I’ll take a look at my workflow at the end of the first day and assess. Then i’ll probably drop half of this gear back at the hotel to work lighter and faster on day two and so on. It’s all down to the environment and what kind of access I might have to the people I want to capture.

Often I find myself just documenting in audio. I’ll share into Audioboo or Soundcloud, grabbing stills to accompany. Video adds a whole other time restraint if not live streaming on Bambuser. To keep it simple, you can just top and tail the video and upload into youtube. Anything less that 30 seconds can go straight into Twitter. I find myself wanting to do a little more and edit on the phone though. This can eat up 20 mins at a time.

Have a think about who your audience is. Are they looking to see the event amplified in close to realtime? Or are you documenting and archiving for the future? Is there already a live stream?  Either way I like to get as much content up and off my phone as soon as possible. You are not always able to be uploading stuff late into the night and the impetus to do so will fade fast after the event.. In the bar.

Finally, remember that you are telling a story. Something with a beginning, middle and end. The media you capture over the course of the event should take the viewer or listener on a journey.

It’s a luxury for many but great if you can have someone gathering your content into a Storify as you go. That’s if you can’t manage at the end of every day. Not only as a repository for the elements of your story. Your interviews and captured moments. But also as a memory cue should you need to create a long form piece later on.

Thinking Digital has always been a great place to play around with new kit as it’s filled with very cool tech loving people always willing to offer you advice and assist in your experimentation.

Apart from a few spares and backups you can keep within reach, stick with the tools and apps you are familiar with, but give yourself time to try something new.  This way you will find your kit list evolve into something you feel you can rely on. The simpler the better.

Remember to capture the essence of where you are. Paint a picture in text, audio, photos, video, and geographic context. If I have done at least that, I feel I’ve done a good job.

I’m @Documentally on twitter. Please feel free to ask me anything there or drop a comment below. A regularly updated kit list can be found on Documentally.com/kit