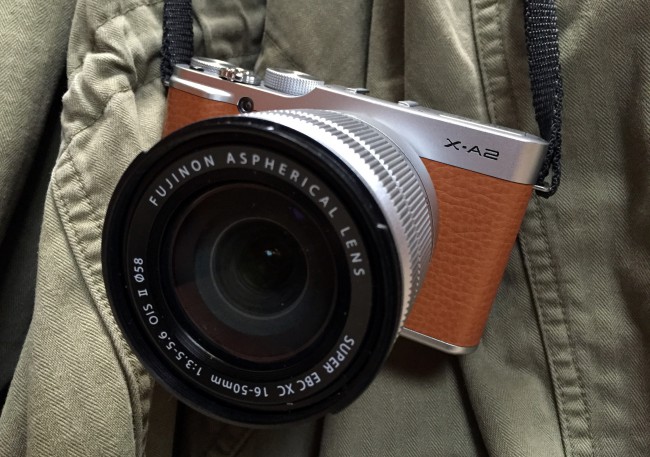 I got my hands on a pre-production model of the FujiFilm X-A2 and as far as I understand the camera is exactly as the one that will be released at the end of February. If anything does change with the final model it will be in the firmware. Rumours are it will be priced sub £500.

I have embedded a Storify in this blog as my review is still ongoing. Updating the content in the Storify will update this post. My summery is at the bottom of this post.

As stated before, I’m an existing FujiFilm camera user and my past X100s has served me well. It takes a lot to have it pried from my hand and pocket.

Although pitched as an entry point into X-Series cameras, the FujiFilm X-A2 seems more than capable for the prosumer. Or even as a main device for the pro-blogger. Start up time is almost as fast as the auto focus and I took the camera out over a couple of days without needing to charge the battery.

This X-A2 also tested my resolve to only use fixed lens cameras. I gave up carting a bunch of lenses round long ago but this body and two lenses did not feel a burden. For a compact system camera it’s super light and even with the 16-50 zoom attached, quite jacket-pocketable.

The fact it is ‘selfie-ready’ is less trite than it sounds. The 175° tilting LCD helps with not only self portraits and from-the-hip shooting, but also assists in pieces-to-camera while video reporting.

My initial experiments at filming while monitoring myself in the screen were a little soft. I also tapped the screen a few times in error thinking it was a touch-screen. Then I remembered the new Eye Auto Focus and all was well. 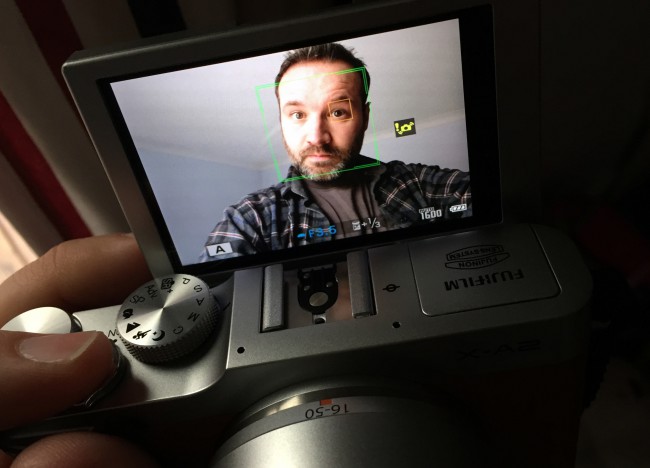 It took me a little while to get used to not having a viewfinder. Mostly in bright sunshine when the screen was hard to see. I quickly realised that I could see enough to frame the image and just had to trust the contrast detection algorthyms were looking after the focus.

I needn’t have worried. The 16.3 Megapixel APS-C CMOS sensor delivers fantastic results. Although pining for a faster lens, I soon realised the updated optical image stabalising (OIS2) ensured I had crisp images when in low light as well as at full zoom.

I would have liked to have a punchier flash for fill-in but as I hardly use it I didn’t fret. Thankfully there’s a hotshot for those that like to have more reach.

As we have grown accustomed to near instant sharing of our images, adding Wi-Fi to compact cameras was a no-brainer. The wireless image transfer for both photos and videos is simple and the free recently updated app more than useable. Photos are fast to share. Large 1920×1080 HD video files do take a while to transfer. Extra battery power or a charger will be needed for both camera and mobile device should this be something you plan on doing often. That said, power usage on the X-A2 is a huge improvement on the previous model.

The placement of the internal microphone holes make it difficult to protect them from wind noise so I’d have to think twice about serious filming outside of video blogging or using this as a second camera. Those wanting an external mic jack will need to spend a little more on the X-E2. You could of course capture audio separately and sync that with the internally recorded track.

I’ve had a lot of fun with it. It’s an easy to use, good looking camera with a great battery life. There’s a load of features for even the keenest blogger or lightweight travel snapper to grow into and i’d even feel happy using this on the occasional assignment where audio was not a focus. Especially if I didn’t want to scare my subjects with a larger in-yer-face system.

Another high quality addition to the FujiFilm family and it has more than enough to keep the passionate image-maker happy.