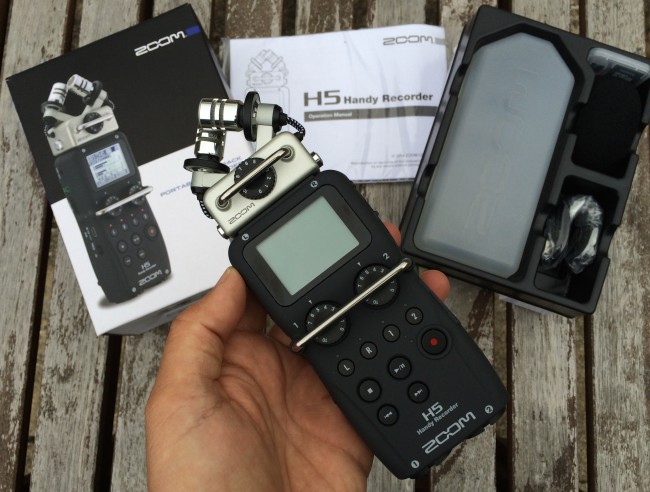 Founded in Japan in 1983, Zoom have been around for a little over 30 years now. They initially worked with manufacturers developing sound generators for musical hardware.

I’m glad that in 1989 they shifted into making their own hardware as for the last 7 years I’ve been a fan of their audio recorders.

In 2007 I shelved a naff digital dictaphone for the Zoom H2 Handy Recorder. It was my first decent portable digital recorder. In many way’s it revolutionised my podcasting. Enabling me to pack light and capture great audio whenever I needed. I remember using it to record a chat with my Gran for an interview with CBC. 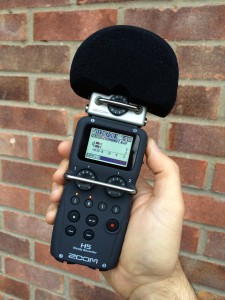 After the H2 I bought the more compact and simpler H1. Then the H2n for it’s midside recording and then the H4n for it’s Xlr inputs. All devices served me well and have since been given away (my H4n was donated to Mark Cotton and the Bletchley Park Podcast) or sold on. With this happy history I had no qualms recently investing in the H5. Once again I have access to another high spec’ed device for my audio and video projects.

I paid £230 for the H5 in ASK on the Tottenham court road. The guys at ASK are knowledgeable and if you ask, flexible with their pricing. They also had the H6, Zoom’s flagship audio recorder. It has a larger form factor, two extra XLR/TLS inputs and a colour screen as opposed to the H5’s monochrome. More than I need as the recording quality is much the same. Both the H5 and H6 are compatible with Zoom’s interchangeable microphone system. That was the main attraction for me.

The H5 comes as standard with the XY stereo microphone module, two AA batteries to power it. Delivering 15 hours recording time. A hard case, usb cable, windshield, 2gb micro SD card and adapter and some software. As memory prices are so low at the moment I picked up a Class 10 32GB micro SD card for an extra £10.

One of the features of the H5 is that it records up to a sound pressure level (SPL) of 140dB. This makes it handy for reporters working in unpredictable environments.

Here are a list of some of the features: 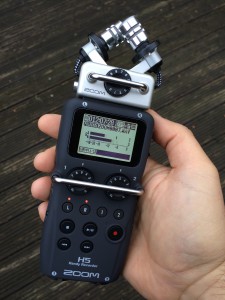 Equipped with the same crisp preamps from the H6, the Zoom H5 Handy Recorder is a great step up from the H4n. The build quality means it’s happy to be thrown around. The shock mount mic system combined with analog gain dials make it easy to quietly adjust the settings while recording.

It’s beautifully designed too. Although the sensitivity to wind means the mics will rarely be seen in the metal as they do better under a windshield or dead cat.

On the whole, a top quality, feature packed, easy to use audio recorder.