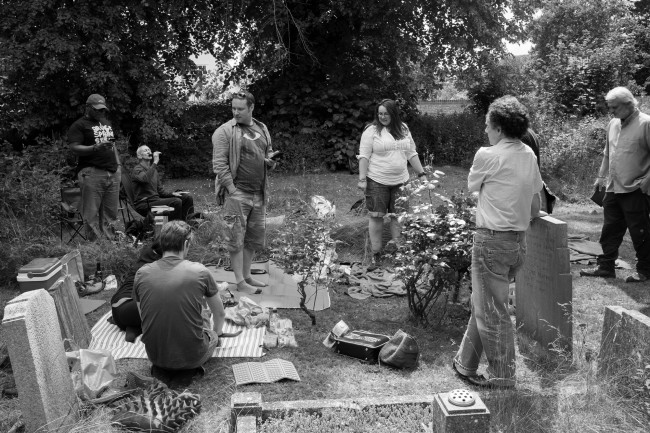 On June the 25th 2014, it will be the seventh continual year there has been a symposium (picnic) at George Orwell’s grave.  It’s also of course his birthday.

Back in 2007 we sat on the grass sharing food and drink, experiences and stories. As we have done every year since. Asking questions, discussing threatened freedoms and eroded civil liberties… all things Orwellian.

We once used the hashtag #1984 ..then twitter broke numbered hashtags so we now use #1984Symposium

It’s always been a small but international gathering. And for most of the last 7 years we have been accompanied by Dr John Perivolaris.

Not this year through. So he sent these words..

“Ahead of the 25th of June, those attending the annual Orwell picnic might wish to reflect on the philosopher Simon Critchley‘s appraisal of our world at this moment in time:

‘Pessimistic is the right word – in the sense in which all optimism is gone, it’s totally evacuated. We’re looking to the really unpleasant nature of political power and the way it functions through mechanisms of surveillance, control and espionage.’

Rather than elaborate, I’d prefer to start the graveside discussion with Critchley’s graveside reflections on the state of democracy. However, the patient isn’t quite dead yet as long as we are still able to use social media to gather together in person and reclaim physical spaces in the name of free speech. I am heartened by the fact that, in England, the picnic is a political act. Maybe, in Scotland too, where I shall at the same time be picnicking at Orwell’s house on Jura. At the edge of Airstrip One, facing Oceania, I will remind myself firstly that, in Owell’s words, ‘Political language […] is designed to make lies sound truthful and murder respectable, and to give an appearance of solidity to pure wind.’ But, I will also be reminded by Orwell that ‘in a time of universal deceit – telling the truth is a revolutionary act.’ Happy picnicking!”

So.. all are welcome. Details of how to get to our Oxfordshire picnic are below. Bring some food & drink, something to sit on, your thoughts regarding the statement above, news and information, tools tips and tricks. And as ever… an open mind.

We live in fascinating times. Public confidence is once again shattered as our government exploits ‘loopholes’ in legislation at the same time as exploiting our lethargy.  No one appears to believe their arguments in justifying the mass monitoring of all of us and every facet of our now transparent lives.

There are morel, social and ethical considerations to be made if we are hobble this totalitarian tiptoe.

If you have any more thoughts or questions please leave a comment or I’m @Documentally on Twitter
When: 25th June 2014
Time: 11am  – till whenever.
Location: Behind The Church of All Saints, The Green, Sutton Courtenay,
Oxfordshire, OX144AE
Google Map: link
Approximate Grid Reference: 51.643973,-1.270901
Bring: Food, drink, thoughts and something to sit on.

Here is a selection of audio recorded at Orwell’s graveside over the years.

Here is a link to last year’s intro blog that had some handy links..