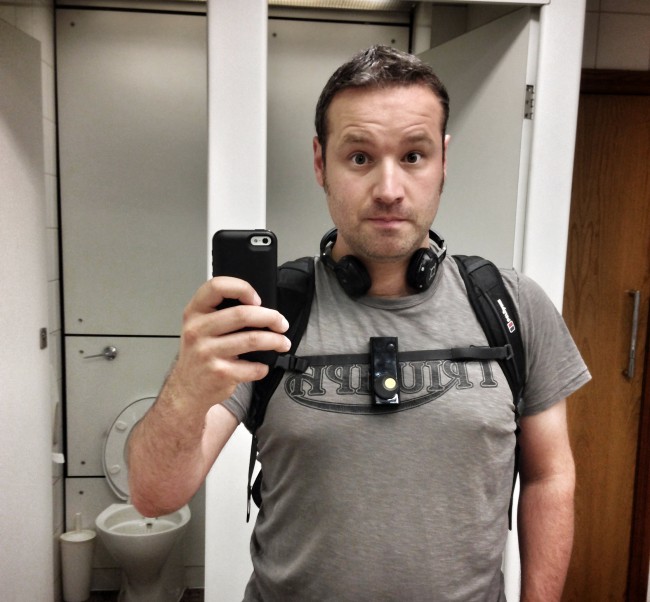 I first got to have a play with the Autographer in March 2013.

listen to ‘Seeing the unseen with @Autographer’ on Audioboo

I had previously heard of Oxfords Metrics Group and their earlier sense cam designed to assist Alzheimer sufferers, but on this occasion I was specifically there to see the prototype device destined to put this evolved medical technology in the hands of the general public.

Finally, last week I got hold of one to try out for myself.

For the record I didn’t pay £400. I met with the Autographer team in the OMG Life (Oxfords Metrics Group) offices in London and was handed a small box containing the camera, a lanyard, a connecting cable and a small slip of paper tucked into the simple instructions. The slip highlighted that when wearing a small unobtrusive camera in public, I may want to take into consideration the privacy of others.

I liked this small touch as ever since I attended the first Memoto meet up in Stockholm last year, quite a few of the issues connected to wearable life-logging cameras have been at the forefront of my mind. Memoto is  a similar life logging device but as yet still not released.

Here is a conversation I had with the Memoto team back in December 2012. (Again I seem preoccupied by the noisy air conditioning in the room.)

listen to ‘Talking Lifelogging with @Okalmaru at @MemotoTeam’ on Audioboo

The Memoto is smaller and more obvious than the Autographer. It uses slightly different parameters i.e place, time, habits, and behaviour. The images are then uploaded manually to their cloud service.

The Autographer uses five sensors, measuring motion, acceleration, changes in colour and light, temperature and direction. An algorithm then decides when best to take a photo.

It has a silent 5 mega pixel camera shooting through a glass hybrid 136 degree semi-fisheye lens, an OLED display and a really simple two button interface. The images are stored on your own devices with the option of sharing to Autographer’s cloud services.

Wanting to limit how much data I was initially recording I set my camera to medium frequency, i.e. to not take the photos too often, and set the GPS to off.

I then went to grab a bite to eat before taking the train back to Cambridgeshire.

The first and so far only time I’ve been questioned about the device is was when I took it off to record myself eating. After I explained the staff seemed more amazed with the device than suspicious as to why this geek wants to shoot time-lapse of their noodles disappearing. I think Hipsters have already paved the way with life-logging to Instagram.

This is so much easier though. You soon forget you are documenting the world around you and for me the most impressive facet of all of this is the ability to quickly and easily share the images taken from the device to the phone via bluetooth and from a laptop when attached via the software. This then enables you to create animated gifs or videos in just a few clicks.

I have not really filmed more than a few hours at a time but it’s stated that the 8gb internal memory. will hold 28,000 images. Set at high frequency the camera would take that 12 days of continuous use to fill the space.

You will of course need to charge the battery every couple of days or so but this does mean you could happily go away for a week without your computer and still have some space left on your return.

The iOS and Desktop app work and look great. An Android app is apparently on the way. I’d love to see a feature request button as I found myself revelling in the simlicity but felt a few modifications would go a long way improving its functions and user experience.

I won’t be the first reviewer to say the image quality from the camera is not great. That said if I wanted to take a crisp high-def photo I’d use my Fujifilm X100s. If I needed a visual witness or wanted to document an event without needing to think about it.. I’d use the Autographer. The image quality will improve. It has to to justify the £399 price tag. For me though it’s the behaviour this nurtures and the questions it raises.

Wearable tech is soon to go mainstream. It already has if you consider some of the fitness apps and devices plotting and recording. And then of course there is the personal data scraper called Google Glass we are expected to embrace after investing a huge chunk of cash in a device we know we can’t trust.

Luckily battery technology does not yet allow Google Glass to be always on. Perpetually recording and sharing images as if providing public (and private) access to our eyes. It’s only a matter of time though.

As a daily diarist I felt more comfortable than I thought I would wearing the Autographer. I captured moments I rarely or maybe never photograph. A couples embrace on a packed train, my hands on a steering wheel, interactions with the authorities, the smiles of serving staff, my Grandmothers sadness.

Occasionally I would remember the camera slung around my neck and found myself suddenly remembering to turn the lens dial to private. I know I can happily take a leak in a public toilet and the camera angle not divulge anything other than the tiling. But I found myself suddenly and understandably concerned by the privacy of those around me. Another time was when I thought other peoples kids were identifiable in a playground.

What might happen when I walk through airport security and inadvertently break the law? What does all this mean for privacy in general?

If this novelty doesn’t wear off, I’ll no doubt be approached and told that i’m invading someones privacy. Should anyone ask I will of course turn off the device. Easy with the Autographer. A rotate of the lens reveals a bright yellow lens cover. I will however enjoy asking said person how they think an offline image captured on my wearable camera invades a privacy already leaking left, right and centre. With every online action, transaction and interaction. With every checkin and status update, with every trip using an online sat nav we erode more and more of this supposed privacy.

With the latest Prism news it appears all we really need to do in order to divulge a variety of personal information is touch a computer or have a phone on our person.

I will always ask before live streaming, before capturing a conversation in audio. But it’s not common practice to ask people permission to photograph in a public space and I wonder how devices like the Autographer might effect the etiquette around such actions and how that will evolve.

We are only just beginning to wrestle with some very complex social and cultural issues around wearable technology, and just because we can automate our personal documentation of the world, it doesn’t mean we should. Either we restrict the technology to fit our level of acceptability or, as tends to happen, our understanding of what is acceptable will shift

Many of us don’t see CCTV anymore. Autographer could be seen as a wearable, consumer version of that, though these new data streams are public and open as well as private and closed.

Soon the Autographer will be as high a resolution as any camera. No doubt with facial recognition and optical character recognition. Eventually the curation software will be even more advanced. Seamlessly archiving, collating and sharing in the background. Maybe in real time. Perhaps with audio.

Autographer comes from interesting and meaningful stock that now gives us a fascinating life-logging tool. All it’s uses are yet to be explored and the real potential will be determined by the users.