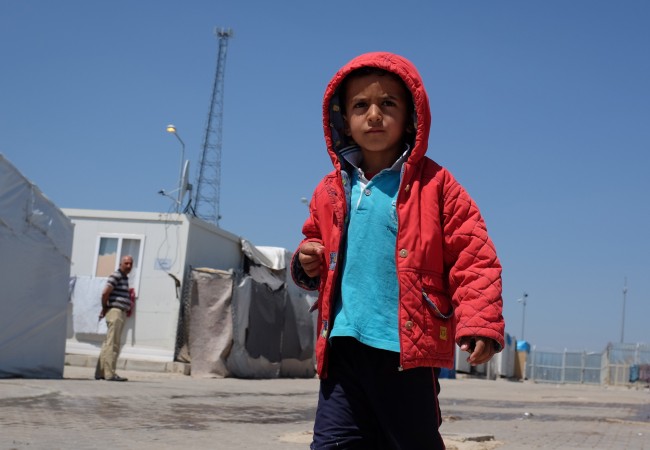 While documenting trucks of aid passing through the border into Syria we get a call and permission had been granted to visit Killis Camp. This kind of access is rare so instead of heading straight into Syria we travelled back a few hundred yards to the camps front gates. We are guided in and told to stick together. Me and Phil feel safe enough and duck away from the observers to explore for ourselves. 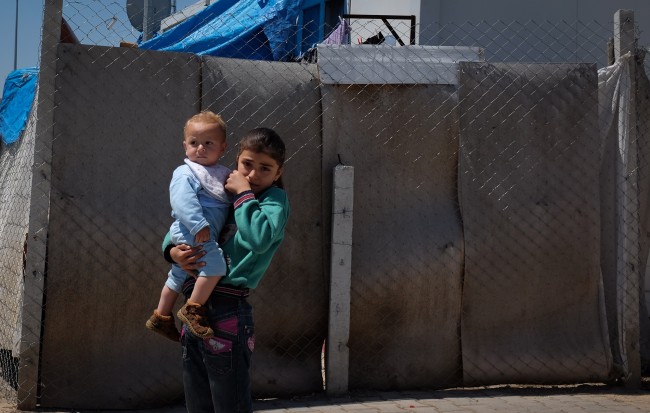 Killis camp is the Hilton of refugee camps as far as Syrians go. Built by the Turkish, on their side of the border, it has bright white metal housing units, not tents, boxes with windows, each with a kitchen and a bathroom. Concrete roads and paths have been laid. It is clean, there is electricity. Satellite dishes all face home. 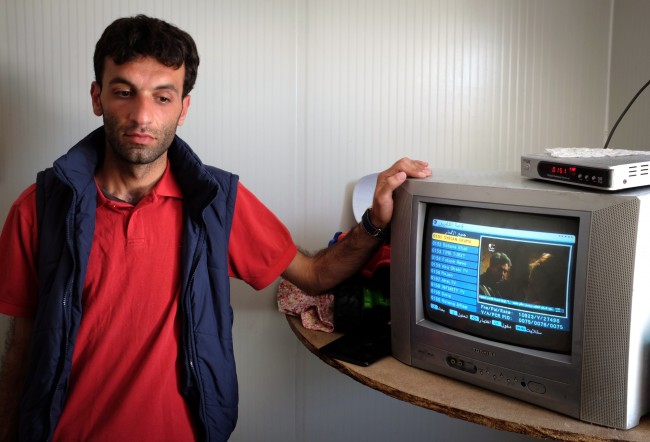 There might be a dozen people crammed into these small, two-room cabins, but no one there seems to complain. They know it’s worse in the squalid tent camps across the border and they are safe here. The cabins are boiling in the summer heat, and people get less than a dollar a day to live on – but all of them say they are grateful to be there, not stranded on the other side of the frontier.

Yusif, a Syrian pharmacist who trained in Russia, lives in a cabin with 11 other family members. He invites us in to look around. It’s hard to see how so many people could sleep in there, but they manage. At the end of each day he and his wife put a mattress down in the tiny kitchen and sleep there.

“We have some problems, but it’s not too much. If you go to the Syrian side of the border there are so many people in the tents, it’s so bad, we are here, we say, thanks God, it’s nice for us,” he says.

“My life is okay here. It’s safer than Syria. There it’s dangerous.”

His house in Azaz has been looted, his family torn from their homes and their future is unclear. However he knows that, compared to many other Syrians, they are lucky. In the other camps they dream of getting to Killis. 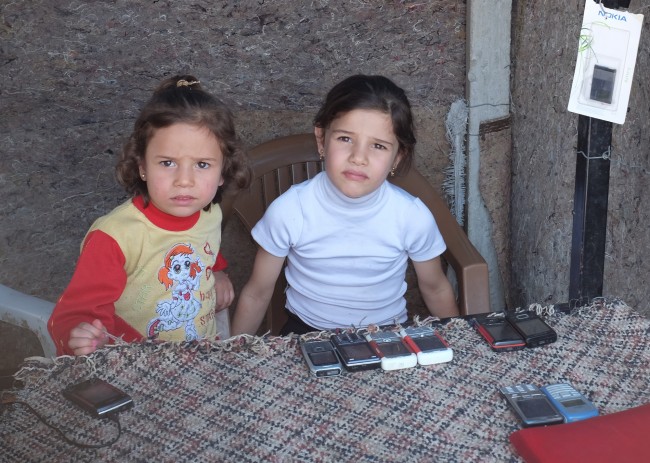 It was prayer time and we follow a group down to where people were congregating. Outside a large mosque, a line of stalls sold bits and pieces – phone batteries, plastic shoes, a few household goods. Simple stuff. It’s a refugee camp and there isn’t much money for luxuries.

One of the shops is actually a small cafe. Really a makeshift tent, not much more than bits of blue plastic for a roof, giving some shade from the bright spring sunshine and, probably in the winter, a bit of relief from the rain. 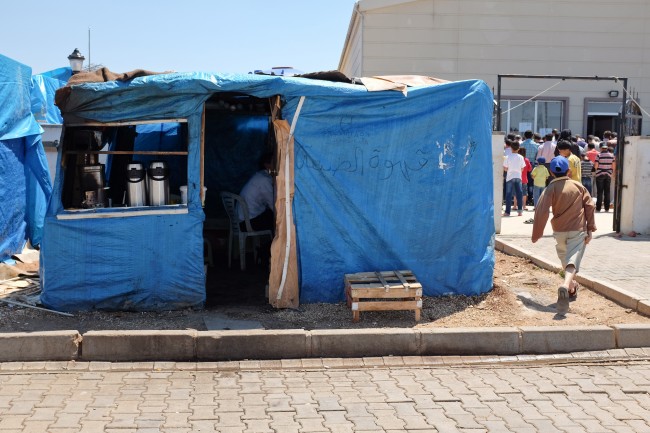 Inside there are some old chairs, a battered table and some rough hewn benches to sit on. At the entrance is another table, with two tall water heaters on. This is Khalid’s coffee shop. 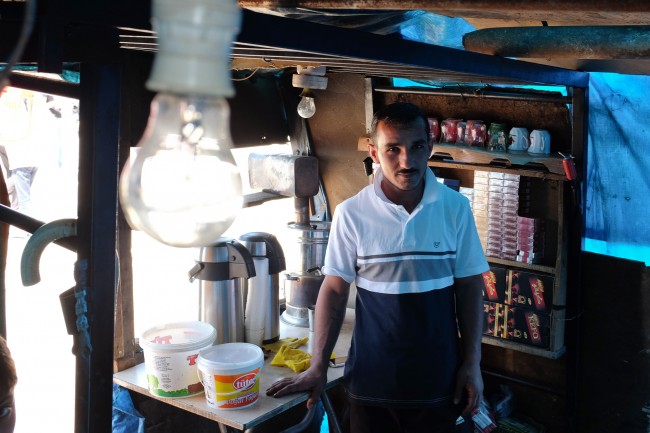 He’s from Jisr Shughour, not far over the border. It was one of the first areas to fight against Bashar Al Assad’s forces, when the early protests were met with a hail of gunfire from security forces. A lot of people in Killis are from there.

Over coffee we chat a bit about things inside Syria. Philip speaks a similar ‘street’ Arabic, I place a recorder on the table and Khalid smokes. We drink the coffee he brought over in small plastic cups. So hot the cup flex’s dangerously but it’s without a doubt the best coffee I have tasted in days. 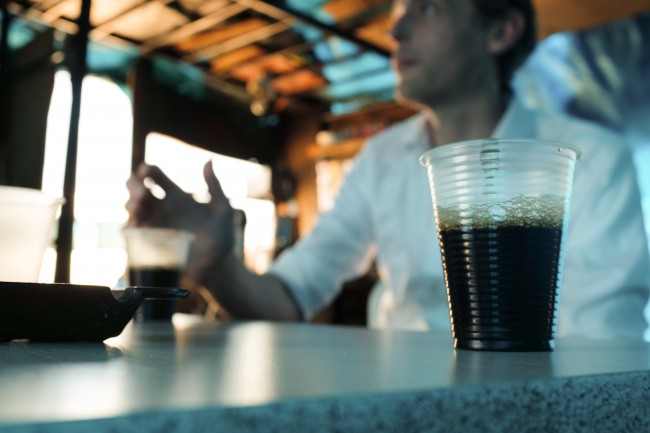 He talks about the Free Syrian Army, saying they’re still short on weapons and money, that they have enough supplies to keep going, but not enough to achieve a quick victory over the regime.

The question of Islamic extremists crops up. Jabhat Al Nusra are strong in northern Syria – they’re one of the most effective rebel fighting groups in the country. They are also allied to Al Qaeda and considered a terrorist group both by Washington and Damascus – a rare point of agreement between the Americans and the Assad regime. 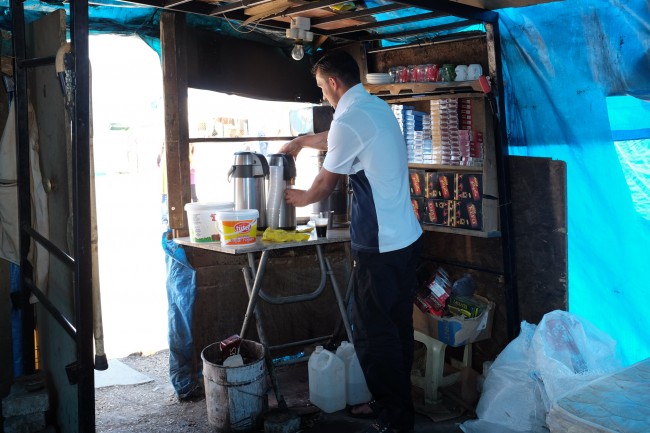 That admission put the Syrian opposition in a tricky position politically and they are still trying to tip-toe along the narrowest of tightropes; Al Qaeda is bad, they say, but most of Nusra are not really Al Qaeda, they’re ordinary Syrians pushed into an alliance of convince with extremists by the demands of a dirty war.

Syria is a complex place, and a desperately complicated war is unfolding there, with so many different factions and competing interests involved, and so much happening in the shadows.

At the beginning of the uprising, it was in its essence simple. There were peaceful protests and demands for political reform in a corrupt police state that has choked the country for more than four decades, and jailed, tortured or killed those who dared to dissent.

Those protests were met with a savage torrent of violence by the security services and, rather than keep walking unarmed into the bullets, the opposition eventually picked up its own weapons.

It was a straight-forward revolution which has been derailed by, well, almost everything you can think of.

Nusra seems to be trying to win hearts and minds in Syria, rather than the old kill ’em all mentality of Al Qaeda in Iraq, which eventually angered even their local tribal allies so much they turned on them.

Nusra distributes food and gas and, unlike some units of the Free Syrian Army (FSA), they, don’t steal or loot. They have earned a fairly good reputation – although many Syrians are wary of those Al Qaeda connections and don’t relish the prospect of an intolerant form of Islam taking root in their country. Syrian Islam has a long tradition of tolerance totally at odds with the fundamentalist ideas of Al Qaeda. 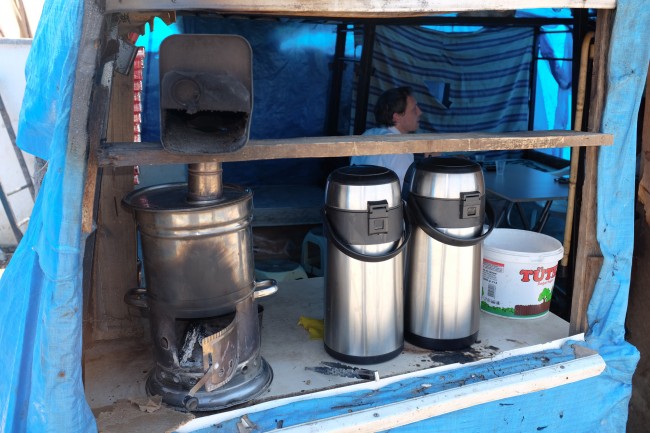 Sitting in his coffee tent, Kahlid says most of Nusra are Syrians and not Al Qaeda – they’re just ordinary Syrians fighting against the regime and they want to be in the best rebel unit. But the rest of Nusra are foreign fighters – Muslims from places like Chechnya, Libya, Lebanon, Turkey and the Gulf who have come to fight jihad.

“Al Nusra are clean, they’re good,” he says. Khalid is smoking and waves his cigarette in the air. “Smoking isn’t allowed,” he says. “If I smoke a cigarette in front of Nusra – well, its forbidden”.

A glimpse there, some insight perhaps, of problems that lay in store for Syria if the hardliners in the opposition keep getting stronger while the more moderate, nationalist fighters remained disorganised, ill-coordinated and poorly supplied. 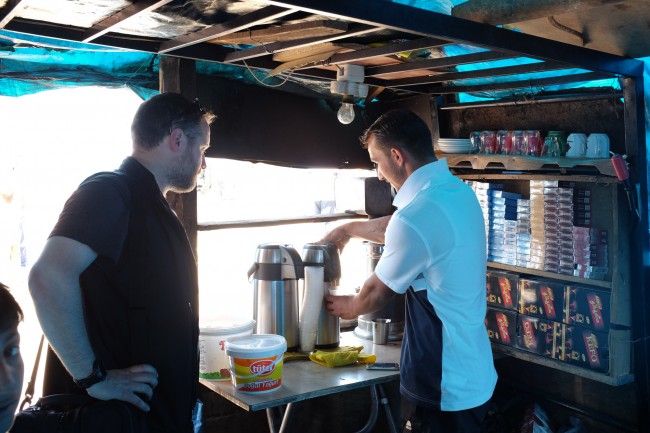 I ask Khalid the name of his coffee shop. He looks puzzeled so Phil translates my question. He initially says “it’s just a normal coffee shop” as though the matter of a name has never come up before.

Then he changes his mind. It’s the Free Coffee Shop, he says. 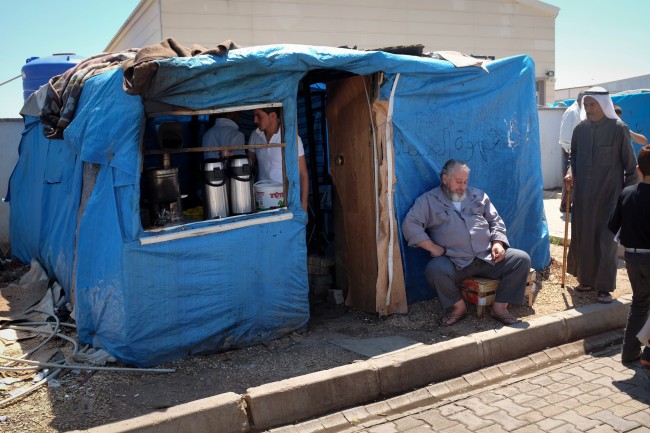 Many thanks to Phil Sands for the use of his interview notes used in this blog post.