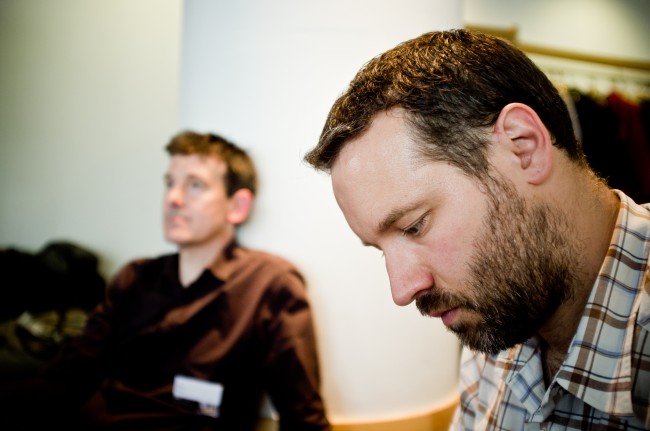 The future of Audioboo is uncertain. Like most online spaces.

This page of blurted sentiment and opinion will probably seem a bit much to some. Perhaps I’m over reacting because something I deeply care about is threatened.

I first blogged about Audioboo four years ago, not long after it’s launch.

I embraced it immediately, wholeheartedly, and have been passionately singing it’s praises ever since. Mainly in my talks and workshops around the globe.

Audioboo, it’s simplicity and why audio is important in today’s connected world has been a major part of my talks. To the foreign office, all the political parties, the British Council, The Open University, Reuters, Aljazeera, the BBC.. Journalists the world over.

I fell in love with the way it just worked. It’s intertwining of geographic data, text, photos and audio. It has been my main digital storymaking tool for the last four years.

I have laughed, cried and shared more via audio than any other medium. All because of this one app.

And this app exists because of one person’s passion and drive. An erratic, spontaneous, unusual man. A boat rocker, a captain of inovation who is no longer at the helm.  He’s been thrown overboard.

I’m not here to martyr Mark Rock. He rubbed a lot of people up the wrong way. He has been known to explode in meetings. He’s upset me more than once, mainly on the phone and not long ago, even though it didn’t last long, I promised myself i’d never speak to him again. I soon realised how much he believed in what he was doing and this made me look at him in a different light.

You need unconventional people to build out of the ordinary things.

You have to admire what he has built, the community that’s been nurtured, the fact that he wasn’t your conventional CEO. And lets not forget his small team. That did so much on so little funding. Of all the platforms out there sharing audio, only one feels like a living breathing organism. A community made of stories.

I thought.. “With people this passionate about what they’re doing.. what could possibly go wrong?”

When I recently caught wind of what was happening inside the company, I genuinely felt queazy as I thought of possible outcomes.

This is the press release that Audioboo have sent out:

Mark Rock, the founder and President of Audioboo, has announced he is handing over all executive responsibilities to Rob Proctor, who has been CEO since October 2012.

Audioboo – a web platform & series of mobile apps focussed on socialising the spoken word through simple record, upload and social interfaces, launched in 2009 with backing from UK broadcaster Channel 4, who still remain an active shareholder. Early success with radio & news groups such as The Guardian have blossomed into key global partnerships with the BBC, Wall Street Journal, The Telegraph, UK Radioplayer and the British Library.

Investors that Rock brought on board to fund the company include Imagination Technologies plc (whose graphics technology powers mobile devices such as the iPhone & iPad), AudioGo (the company that bought BBC Audiobooks), Simon Fuller’s XiX group and a key group of angel investors including Sir Don Cruickshank.

Rob Proctor, current CEO of Audioboo, said: “Mark has done a remarkable job of creating such a unique concept and bringing it to market. I feel genuinely privileged to be involved with such a great company and amazing team and look forward to helping the company realise it’s tremendous potential.”

“I was born with itchy fingers, “said Rock, “And a stupidity to believe anything can be achieved if you click your heels together 3 times. Now that Audioboo is stable and thriving, I have the urge to click those heels again in a few new areas.”

In a personal note sent to staff, Rock wrote: “I’ve spent 4 years crafting this vessel with many of you, piloting it away from the inhospitable shores from which it launched. We’ve nearly hit open seas. A time for a captain to take over. I have, after all, other ships to give shape to that are waiting for me.”

Rock will continue as a Board Director at Audioboo and remain a significant shareholder. Relaxing with a week of diving in Malta after leaving, he so far has no firm plans on what’s next. “Let’s see. I’ve weathered taking an idea with absolutely zero spending cash, no business plan and what sometimes seemed like an odd proposition. Nurtured, sculpted and grown into a solid platform that is now attracting key visibility – not only in the UK but internationally. I’m proud of that and knowledge learnt I’m keen to embed in other ventures and partnerships.

It’s another carefully crafted document to smooth the transition of another comfortably conventional suit into his cash focused role.

I hear you say.. “What are they here for if not to make money?”

Is it only about the money? Do we invest our time, words, ideas and feelings wrapped in stories just to make the other investors rich?

When I first visited the Audioboo offices, a speaker on the wall would play people’s uploads as they hit the server. The team coding and creating below were as much a part of the community as those sharing their lives around the world.

Mark Rock and the team managed to create something really special. An ecosystem now hanging in the balance.

What kind of community are you building when money is your only focus?

If the shoddy so called update to the Audioboo app is anything to go by, the company is going to need more than a CEO who knows his way around the boardroom. It’s going to need to reconnect with those truly passionate about social audio. Those who live, eat breath and share audio stories.

We have seen too many unsustainable platforms fall by the wayside. Seesmic, 12 seconds, Phreadz. Some so desperate for growth that a pulling of the plug appeared to be the only option in a bid to cut losses.

I said it not long ago..

“As we invest so much of our cultural, conversational histories and stories, is it too much to ask that the companies hosting and archiving them guarantee that they will not only be there for future generations, but they will maintain the connections and metadata?…”

I can’t say my heart is no longer in audioboo because that’s exactly the problem. I have shared so much into this digital space that a chunk of my heart and soul hangs in there, strung out in the noughts and ones.

There is value being generated daily, by countless individuals living richer lives because Audioboo exists.

I hope the new Audioboo listens to the real investors.