I understand that it may be impossible to identify beyond a shadow of a doubt where Britain’s oldest pub actually is as there are so many Inns and ale houses laying stake to the claim. And as you can imagine, acquiring the label ‘Oldest Ale House in Britain’ is great PR. 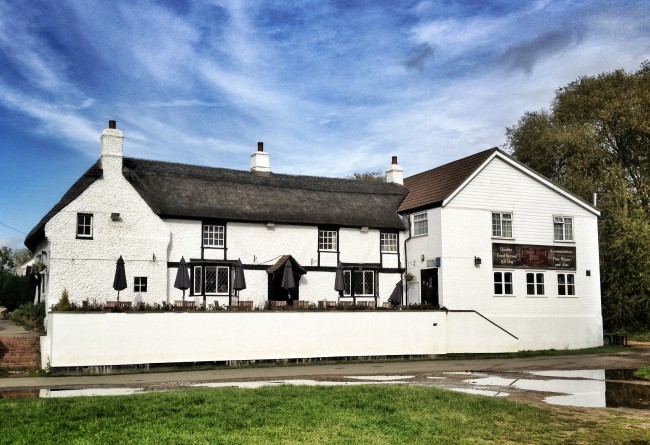 But after a good chunk of ever-so-reliable internet research I chose to visit The Old Ferry Boat Inn in Hollywell, near St Ives, Cambridgeshire.

Many will contest that Ye Olde Trip To Jerusalem is the oldest Inn in the Britain and on the many occasions I found myself drinking in ‘The Trip’ as a teenager I heard the same.

For me though, I was intrigued by the claim that the Old Ferry Boat’s foundations may date back to 460AD and that ‘records show’ liquor was served from 560AD.

Having been rebuilt a few times, as is often the case with thatched buildings that suffer a fire, It’s hard to prove much of what’s claimed. Even if the body of jilted lover Juliet Tewsley still lies under the stone in the floor that’s visible from the bar. In fact when I popped in today there was a man sat upon her alleged resting place, eating pie.

I was on the way to an internet free retreat in Norfolk where I hoped to get some work done when on the A14 I realised just how close I was to The Old Ferry Boat Inn.

So I took a diversion and parked up out front on the banks of the swollen River Ouse.

When I asked the bar manager (Kat) if I could interview her about the history of the Pub she gave me a firm no and told me she was not allowed to talk to the media. I explained that I was blogging because I loved to share stories and my intentions were purely honorable. No joy though. Apparently Greene King have a strict policy against such conversations taking place with mere staff and if I had phoned ahead they could have prepared a press release.

I can’t begin to tell you how much this pissed me off. Nothing to do with Kat. She was courteous and polite and explained that if she talked to me she was in breach of her contract. She gave me the phone number of the Greene King PR department written on the back of a card saying “Please review us on Trusted Places”. The irony was not lost on me.

I took my drink and my frustrations to the other side of the bar. I thought about how these places are all about stories and storytelling, and that no one has owned those stories for the last 1500 years so why think you can just take ownership because it suits your ‘Public Relations’ modus operandi.

I think it’s foolish to sacrifice public relationships in the name of public relations. All I wanted was a little history around the pub that I was currently enjoying. Interesting how the brewery trusts the Manager with the running of the place and all the financial responsibilities that that comes with that, but bans them from sharing it’s history with someone who may share it with others.

Anyway, I quickly realised that it wasn’t the Manager I needed to talk to but some locals who have drank there through numerous landlords, owners and managers.

I soon got chatting to two regulars called James and Paul. Two guys who knew the place, it’s people and it’s stories. We had a lovely unrestricted chat. As things should be. I told them I was a blogger and fascinated with these kind of places. These story hubs. These locations in space and time where for countless years, maybe 1500 in this case, people have made connections, told stories and shared news. Social networks.

It was a shame that I couldn’t record a chat with those that ran the pub. The current keepers of it’s story. But then perhaps its legends and tales that have become popularised over the years are the least interesting in the grand scheme of things. So much has happened in the Old Ferry Boat’s alleged 1500 years. How is it possible to even touch upon it’s rich history? Nearly all of it undocumented.

Maybe I should have just sat and soaked up the atmosphere. An atmosphere that was initially cold and unwelcoming due to the controlling hand of a hidden corporation threatening to slap any worker who dared to have an opinion, a care.

Storytelling in general is a communal act. Taverns were the new open fires.  Thankfully in this tavern I was saved by the Inn’s loyal patrons, James and Paul. They made the space what it was. The most recent in a long line of amateur historians. Keepers of the stories and ambassadors for this small space that has potentially brought strangers together for a one thousand five hundred years.

They left me reminded of how we are all made of stories. Of what Alan Rickman said..

“And it’s a human need to be told stories. The more we’re governed by idiots and have no control over our destinies, the more we need to tell stories to each other about who we are, why we are, where we come from, and what might be possible.”

I recorded some audio after I left..