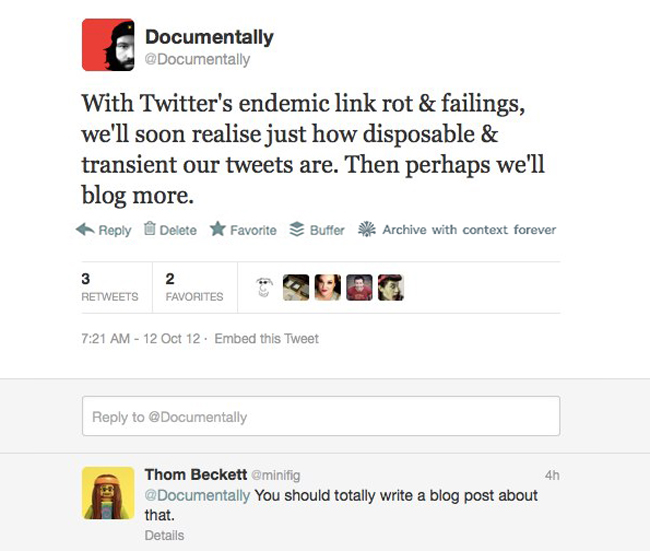 When I talk and give workshops I often have a slide stating my concern for the demise of stories on the web.

Of course some people use Twitter for just that. Disposable throw-away comments.

I doubt micro-bloggers and journalists always feel the same way. Or the people who use twitter instead of email. Or those serialising novels through these channels, seeding projects, replacing letter writing or sharing stories in general.

I have a few friends using online archiving solutions to back up their social platforms. They back up their status updates as they would their documents and multimedia. Though hardly ever with the conversations and context attached.

It’s not just an issue with Twitter of course. Connections are being severed continuously. And our current attempts to archive these digital histories can’t keep up.

As we invest so much of our cultural, conversational histories and stories, is it too much to ask that the companies hosting and archiving them guarantee that they will not only be there for future generations, but they will maintain the connections and metadata? Unless of course we choose to annoanamise or remove that data ourselves.

Recently I wanted to move my blog content so it would sit under one banner, Documentally.com. Richard Mackney made the migration painless, showing me that with a little preparation you could maintain all the old links by redirecting them to the new url’s.

It got me thinking again about all the times holes in the internet are formed when links die. Either through sites and pages moving or vanishing, or url shorteners failing to connect.

It’s not just this linkrot that’s a huge issue. It’s the lack of responsibility on behalf of the start-ups not offering some kind of guarantee. All the time asking for content creators and conversationalists to invest their time and stories into pages which may not be there next year.

Would we behave any differently if we realised we were sharing our thoughts with the digital version of invisible ink? Isn’t the archiving quality of all that is digital flaky enough already? 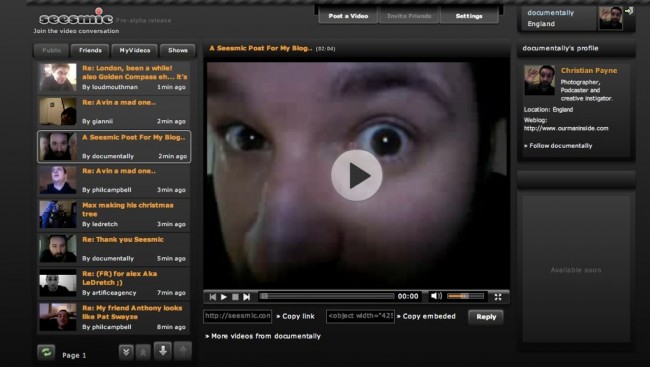 Those who used the asynchronous video conversational platform Seesmic will know just what I’m talking about. Thanks to someone on the inside tipping me off, I was able to download most of the 6000 videos I’d recorded. Many users were not so lucky. 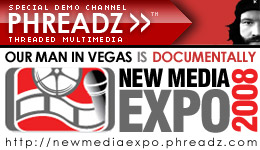 Through no fault of @Kosso‘s the Phreadz servers were also switched off, losing countless archived conversations and the videos that made them. Kosso now implements a dropbox backup system for users who share multimedia through his platform (currently in closed beta) Mobods.

When the money ran out, 12Seconds.tv acted more responsible than many when they offered users a download of all their 12 second videos as a standalone website that could be re-hosted elsewhere. 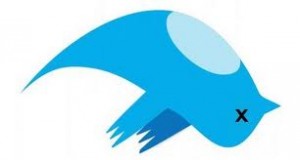 On the 8th of October 2012 Twitter’s t.co link shortening system experienced a 40 minute outage when after a phishing complaint an Australian hosting company put the t.co domain on hold.

As users, when we post and share content online, if we care about the stories embedded within our musings, we need to think more about web archiving solutions. Perhaps even insist platforms backup to the places already harvesting web content to keep it safe for the future.

I’d happily support the reinvention of the local library. A place I have sadly ignored for years. I’m thankful my local library has so far survived the cull but would they not also work well as a decentralised server farm for remote web data harvesting.

I’m just thinking out loud now. There are no doubt existing solutions and better to come. I fear we just don’t think about this enough. And there are so many reasons for us to care about archiving the web.

Despite it being the largest document ever written, It’s the collective works of countless international authors working in the worlds languages. It’s certainly growing faster than I can read it and this growth is not going to slow down even though huge portions of the web are continually disappearing.

Perhaps it’s down to the individual to become Librarian and Archivist of all that we produce and curate. I don’t think preservation and access is the most important concern in the minds of the patrolling stakeholders as they pace the perimeters of their walled gardens and data silo’s.

What will you have to show for the years of your life spent inputting data to the web?

A tweet is not just a tweet.  It’s a part of our digital heritage. A fragment of our culture, digitised.

Should it really be this ephemeral?