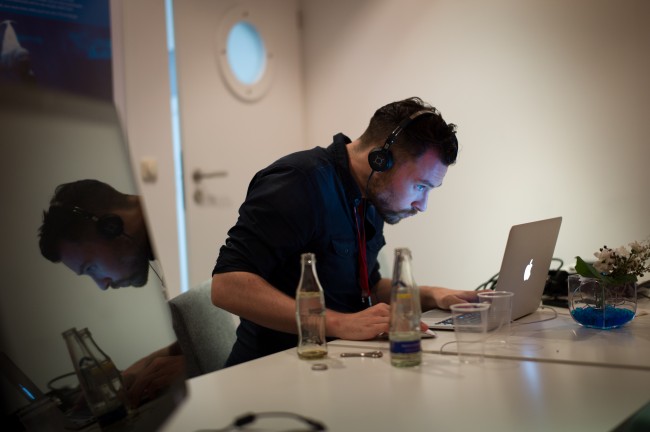 The five days in Berlin happened amongst a whirlwind of other assignments I was doing in and around Europe. In fact I am only finding the time to reflect now.

I traveled out to Germany with Ben James, aka @BennyCrime. It’s not the first time we’ve worked together. I hired Ben to edit a project I recorded in Pakistan for the British Council.

If you stumble upon Ben on the interwebs you might be led to believe he’s a badger fixated, Doc Martin wearing, wax mustached nutcase.

Our brief was open and flexible and Dell gave us lots of space to experiment. I didn’t want to pretend to be knowledgeable in a field I know little about. Instead we hoped ultimately to have tech related fun and share videos highlighting what Dell as a company have to offer and what they were up to at IFA.

There were some late nights, a lot of running around sweating, and just enough cold German beer to keep us sane. Although I can only speak for myself on that one.

For those that are interested I ran around with a Zoom H4N attached to my belt with the H4N belt clip, interviewing with a Rode nTG1 mic mounted on the Rode pistol grip pg1. Ben shot on a Canon 5d mounted on a Cinevate UNO Rig with an LED LIGHT and 24-105L Lens.

Here is a YouTube playlist of the five videos we made..

Ben was a pleasure to work with and as you can see,  we had a lot of fun.

Should you want video blogging along these lines (we don’t do weddings or Bar Mitzvah’s) let me know by emailing the details on my blog or contacting me via @Documentally on twitter.