I hadn’t gone into the operating theatre yesterday with the intention of tweeting my operation. Initially I just wanted to interview the Surgeon mid op. 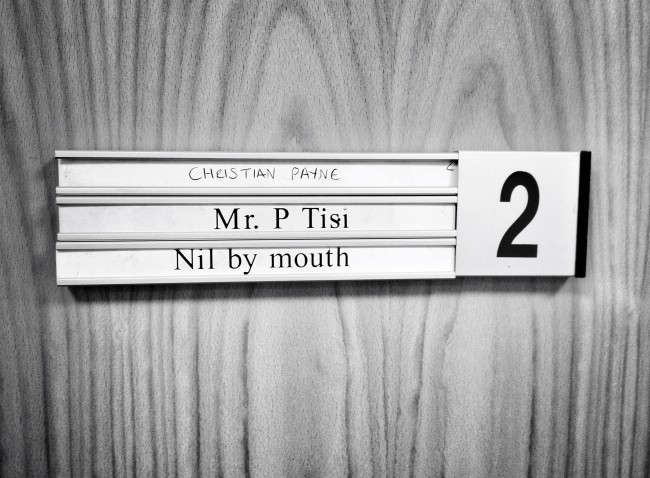 Before I continue I must apologise. I’m writing this while under the influence. Painkillers. Powerful ones.

Last night I underwent an operation to fix an inguinal hernia. You can get them at any age and I was surprised to find out many of my friends already had. 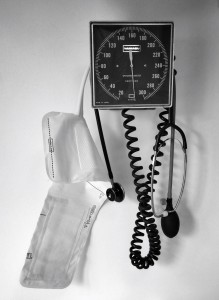 I got mine in February and it may have been caused by a combination of attempting to lift more compost than is humanly possible and trying to out exercise an iPhone app. As a result a part of my small intestine had popped through my lower abdominal muscles in my groin. Between the abdomen and thigh.

After it ‘popped out’ I found that if I was going to do anything that involved excessive exercise, I could control the pain by sticking a ‘Ben Ten’ rubber ball down my trousers.

That wasn’t a prescribed fix as when I initially did go to my local doctor he told me I had pulled a muscle.

I had already Googled my symptoms and was pretty sure It was a Hernia. I didn’t want to argue. Although way younger than me I had no doubt he was also way smarter than me as he had a load of framed pieces of paper on the wall that said so.

While occasionally incapacitated in this way I was travelling the world, running all day workshops, documenting events and talking at conferences. Business as usual just with a box of painkillers in my backpack and a kid’s toy in my pants.

Although I carried on regardless, I knew it could not be ignored as more internet research offered the sentence “..strangulated hernia followed by death”.

The driving force for me to do something about it was a) remembering I had access to free medical insurance and b) that it was soon to expire. This enabled me to get a second opinion and potentially get it fixed in a private hospital. 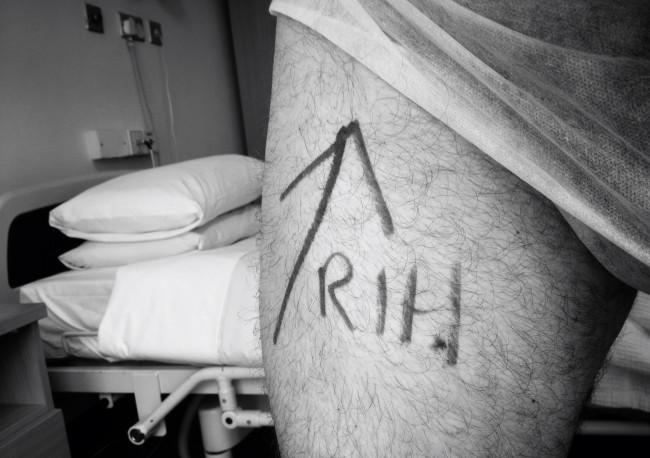 I have little to no personal experience of public hospitals other than knowing wonderful people that work in them and the great care given to my son in the ER despite a 4 hour wait. There is also of course the dark visits to see friends and loved ones who on some occasions didn’t make it out.

So, in a hospital that looked more like a manor house and after an immediate two minute diagnosis of a right inguinal hernia, I got to choose the day I wanted to be operated on. My diary was full for the next few months so I picked yesterday as it was the beginning of a two week ‘quiet’ spell. I have given myself these two weeks to recover and should I do any work from home at this time I hereby add the disclaimer that I am certainly not of sound mind or body. 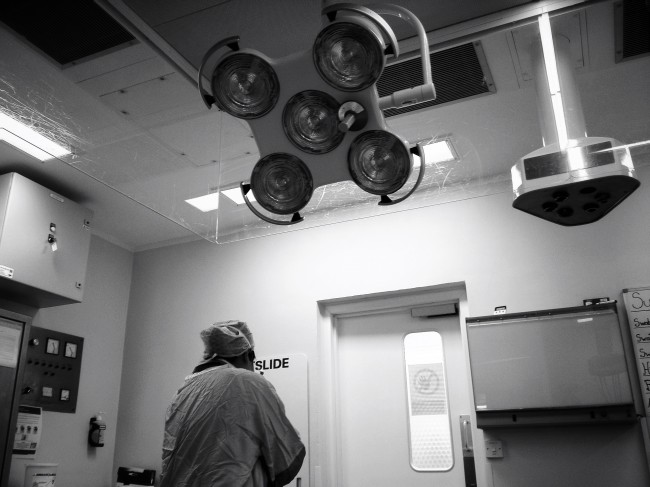 Now I share a lot online. The more I share, the more connections I make and the more value I seem to get from sharing.

For some reason though, probably because I thought it may plant a seed of doubt in the minds of potential clients as to weather I could do a job, I decided to keep my hernia offline.

That was until the 14th of May when BBC Radio aired a programme entitled The Digital Human by Aleks Krotoski where she asked if we’re sharing too much of ourselves online. Then she asked me what I hadn’t shared online and I blurted out that I had a hernia. 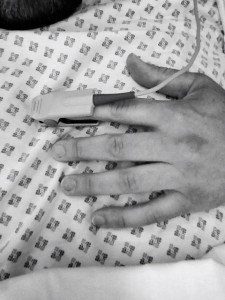 It seemed to pass most people buy luckily. Apart from the momentary forming of a tribute band called Sue and the Hernias.

So last night, as I was waiting to be injected with a variety of needles I recorded an Audioboo sharing how although in my very plush surroundings I was still apprehensive.

Perhaps she was not taking me seriously in my paper underwear and my back-to-front nighty, but the nurse seemed a little surprised I only wanted a local anaesthetic and went to the doctor to check.

She came back to the room with a mixed look of respect and pity on her face. I told her I liked to experience new things and this was certainly a new thing for me. There is some really important stuff being done to my body and I wanted to be awake when it happened. It’s not paranoia. It’s curiosity.

She then stabbed me in the gut with a needle.

I asked her why nurses say, “little scratch.” before doing that and then realised that the only other practical word combination (‘small’ and ‘prick’ spring to mind) would not install the greatest of confidence in a guy standing with his bits on show. 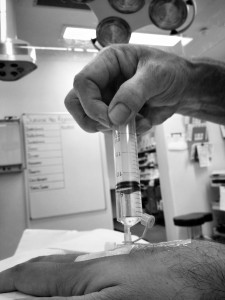 In my initial examination I was told I’d be able to lie there pain free with local anaesthetic, listening to my own music. Just before I was wheeled in though the surgeon told me he wasn’t sure if my bluetooth headphones would affect the machines so I’d best leave them behind.

I took my phone in anyway and asked if he minded being interviewed during the op. He obviously thought it an unusual request as he had a bewildered look on his face. Not the kind of look I really wanted on the face of the man about to take my life in his hands.

Nevertheless his first response was, “Lets see” which after consulting with the four other members of staff became, “We had better not. We’re not sure what hospital policy is.”

I asked if I could still use my phone and that was okay. I asked to take a couple of photos and me and the anaesthetist chatted about the slither of wifi we could pick up from the corridor outside.

These were smart people and if I had been allowed to record you’d have heard a complicated language of anatomy and physiology.

I lost count of all the needles I felt going in to my nether regions. I lost nearly all feeling down there too. There were a couple of isolated spots the burning liquid must have missed that later enabled me to experience the flesh searing sensation of a red hot broadsword thrust into my groin and slowly, up into my stomach. Or at least that’s what it felt like. 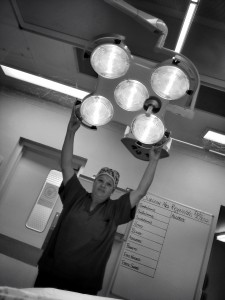 These moments were few though and always followed with, “Sorry let me pop the needle in there.”

We shared a few laughs in the room and I tweeted a few tweets to those outside and although having my technology was a wonderful distraction, it also felt very natural. It was only the comments from others that made me think this was perhaps an unusual thing to do.

Apart from those who thought it funny to ask me for luggage advice while I was opened up and the scent of burning flesh filled my nostrils.

It was nice to have my friends there. To have a different perspective on the scene that was laid out red and pink before me.

The occasional spasms of pain went from being my centre of the universe to just another thing happening somewhere in a much bigger world.

The net addicts among us are those who don’t see online and offline as different places. At the moment though our cumbersome devices are the barrier between these spaces and the hyper connected only stand out because of this.

When the tools have vanished and the technology is ubiquitous the addicts may only be identifiably by how much they share.

That’s if the future allows us to choose what and how we share. 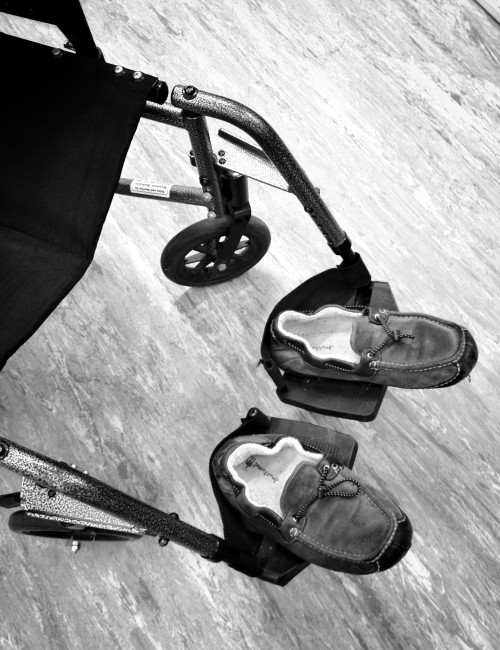 The banter in the room is jovial. Despite having a bleeding body in the room.