It was meeting Tom Herbert at the Do Lectures that inspired me to have a go at baking sourdough. And it was Tom who gave me a jar of 57 year old (55 years old in 2010) sourdough to take home and try.

Luckily it came with a handy recipe card with all I would need to know to get going.

The ingredients were listed as so:

I had fed the sourdough 12 hours before I was due to start and this involved adding 75g of warm water and 75g of wholemeal flour to my existing 225g. I gave it a mix and left it out.

12 hours later I assembled my kit and weighed all the ingredients into the mixing bowl, mixing together with the plastic scraper. Once I had a rough wet dough I turned it onto a table and got to work on it. 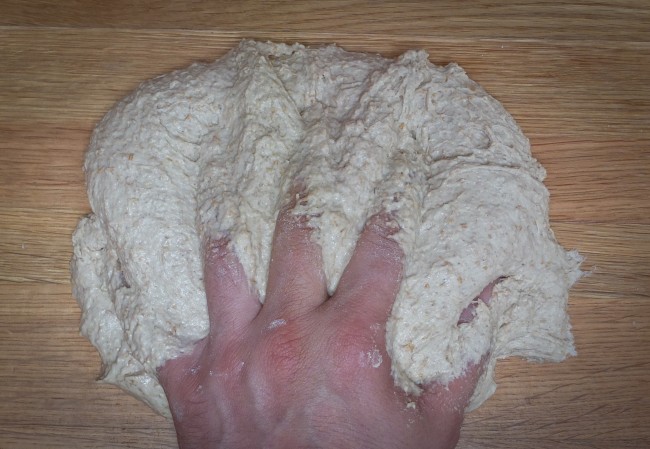 It was a little wetter than I wanted but after about 10 mins work I got it looking like a stretchy soft lump.

I then popped the dough back into the mixing bowl and covered it with clingfilm. While I left it for half an hour to relax, I fed my sourdough and popped in in the fridge for next time.

After half an hour I lightly dusted the table and plopped the dough out and molded it into a rough dough shape. I then dusted the proving basket with flour and placed in the dough covering it with clingfilm. I then left it for 12 hours.

When I returned it hadn’t doubled in size but I thought stuff it. This was my first attempt and I was getting hungry.

I heated the baking stone to 230°c and teased the dough onto the stone. As per instructions I marked the top and sprayed, or rather splashed water with a brush (as I didn’t have a sprayer) on the top of the dough.

Half an hour later.. I had a loaf!

And what a loaf. I taped it to check for the hollow sound and although it was thinner than I had hoped, the important thing for me was the taste.

I wasn’t disappointed. It was absolutely delicious. I knew I could work on getting the rise right but the taste was better than I expected.

Since making my first my following experiments have gone from strength to strength.

I want to thank Tom Herbert for the inspiration and highly recommend anyone have a go at making a sourdough loaf.

(I am writing this post up after the event and the sourdough is now 58 years old!)

If you don’t want kittens to die subscribe to this blog.