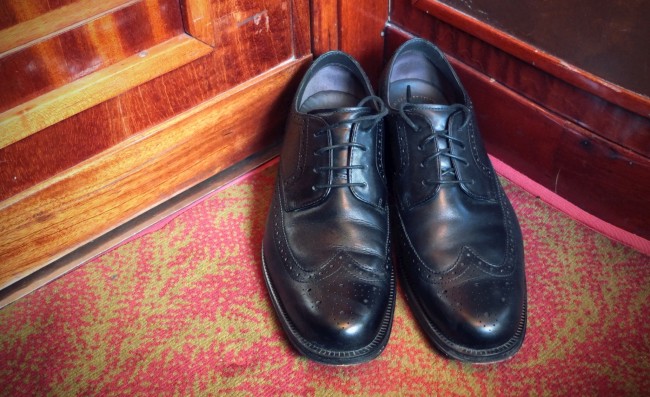 Humans have been protecting their feet with some kind of covering for at least 26,000 years. Some studies of the bones of ancient humans suggest as long as 40,000 years.

The Egyptians were the first to take this seriously, creating pads of leather or papyrus bound to the foot with two straps.

Depending on region and climate some areas around the world developed shoes independently at different times.

The Romans developed the ‘Calceus’, a kind of shoe slotted at the side and knotted at the front. Different footwear would be worn by the different classes of society. You might say this kind of thinking continues today.

Our modern shoe lineage appears to start at the Crusades with Crusaders needing something a little more substantial to protect them on their long journeys.

Not long after, the real art of shoemaking began to appear and thrive in France, Italy and England. 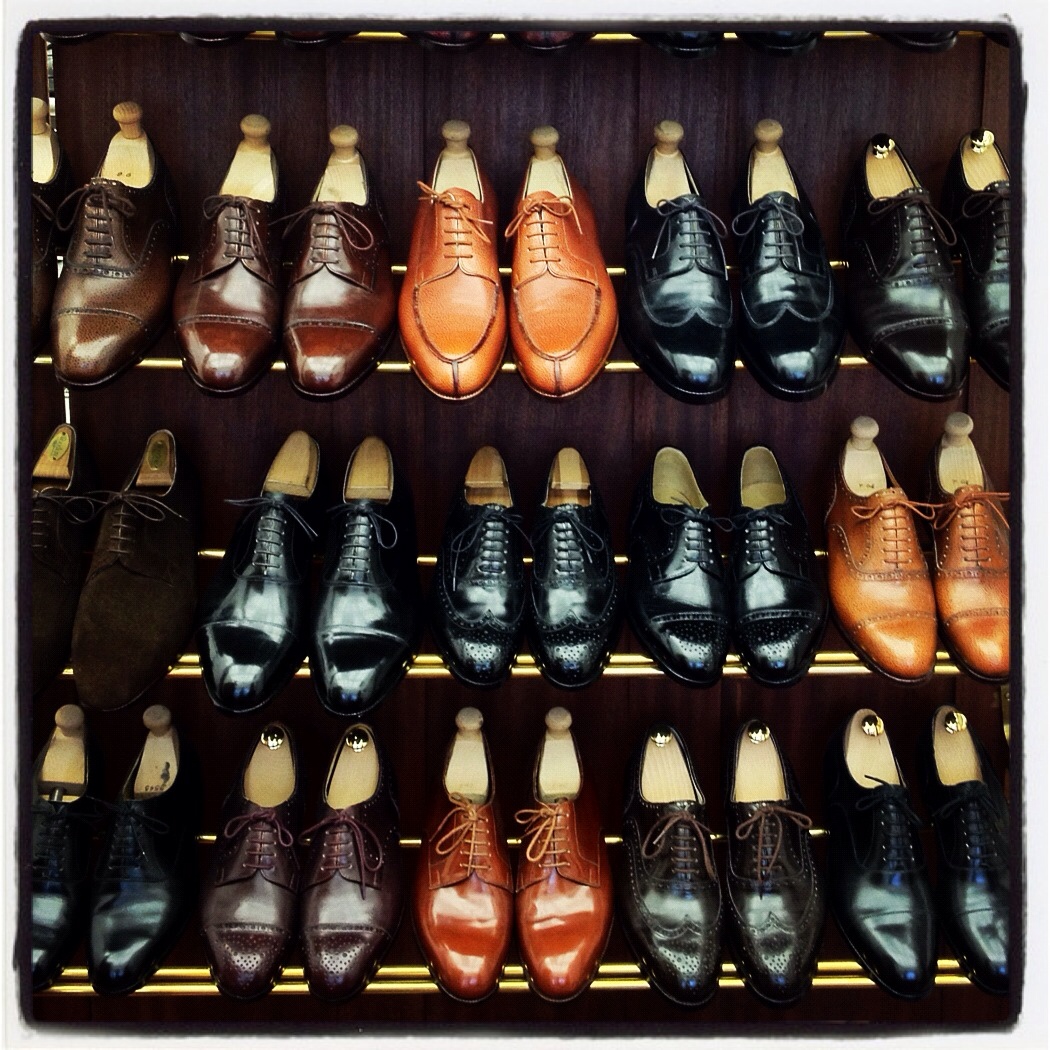 I remember being told to wear only shoes at school. I also remember being the butt of a few jokes because of a certain style I turned up with that were soon dubbed ‘Rain catchers’. This may have subconsciously turned me off the benefits of a good shoe. They just didn’t seem cool.

My cupboard at home contains footwear for all occasions. Trainers, I don’t train in, cheap shoes I’ve worn once, climbing shoes so intentionally tight they hurt, walking boots that have done thousands of miles and motorcycle boots I don’t wear nearly enough.

I tend to find a pair of trainers I like and wear them till they fall off my feet. This is normally only a matter of months. Being a dog walking country dweller, in the winter I wear a decent pair of welly’s and in the summer I switch between a walking trainer and Velcro strap sandals.

I never thought I was scrimping on shoes. But I now realise I have not really been investing in my feet either. My most expensive footwear? In 1994, as a thank you, I was bought a pair of walking boots for over a hundred and fifty pounds. I still have them today. They keep getting more comfortable.

Recently I bought walking trainers in a sale that would have cost over a hundred pounds and the sales person expounded the qualities of the sole.. “You can replace it with a new one when this wears out” he said.

Weirdly this was a great selling point for me but later I imagined my late grandad scoffing at the lad telling him all of his shoes had been rebuilt at some point or other. That’s what people do with shoes.. Fix them. Not any more it seems.

As I write this paragraph, on a train crossing Europe, I’m having a serious rethink of my footwear philosophy. I may have been a little short sighted in the past. I may have held unjustified prejudices. Recently my feet appear to have had a small and very comfortable revelation.

For the last four days I have been wearing a pair of leather brogues. I was coerced into buying them due to a strict dress code set by the Orient Express. The undertaking of this ‘trip of a lifetime’ had me purchasing all kinds of attire I would not normally shop for.

Shirts, a ‘smart’ jacket, a tux, basically the dress of a person moving in circles other than the ones I’m used to. Everything was ‘off the peg’ none of it bespoke. The shoes I bought were from a major high street store well known for its brand of shoes. At over £70 I was told by the helpful staff these were the best shoes they stocked. I thought £77 quite reasonable, thick leather and an insole comfort system the staff were also wearing. I have spent more to have a logo emblazoned on the side of my footwear.

I can’t remember walking so much and not complaining about achy feet. According to my ‘fitbit’ (a sort of digital pedometer) I have walked over 60,000 steps these last few days. Not a huge amount, enough to have my feet know about it though, and I think my new shoes have something to do about it not being an issue. 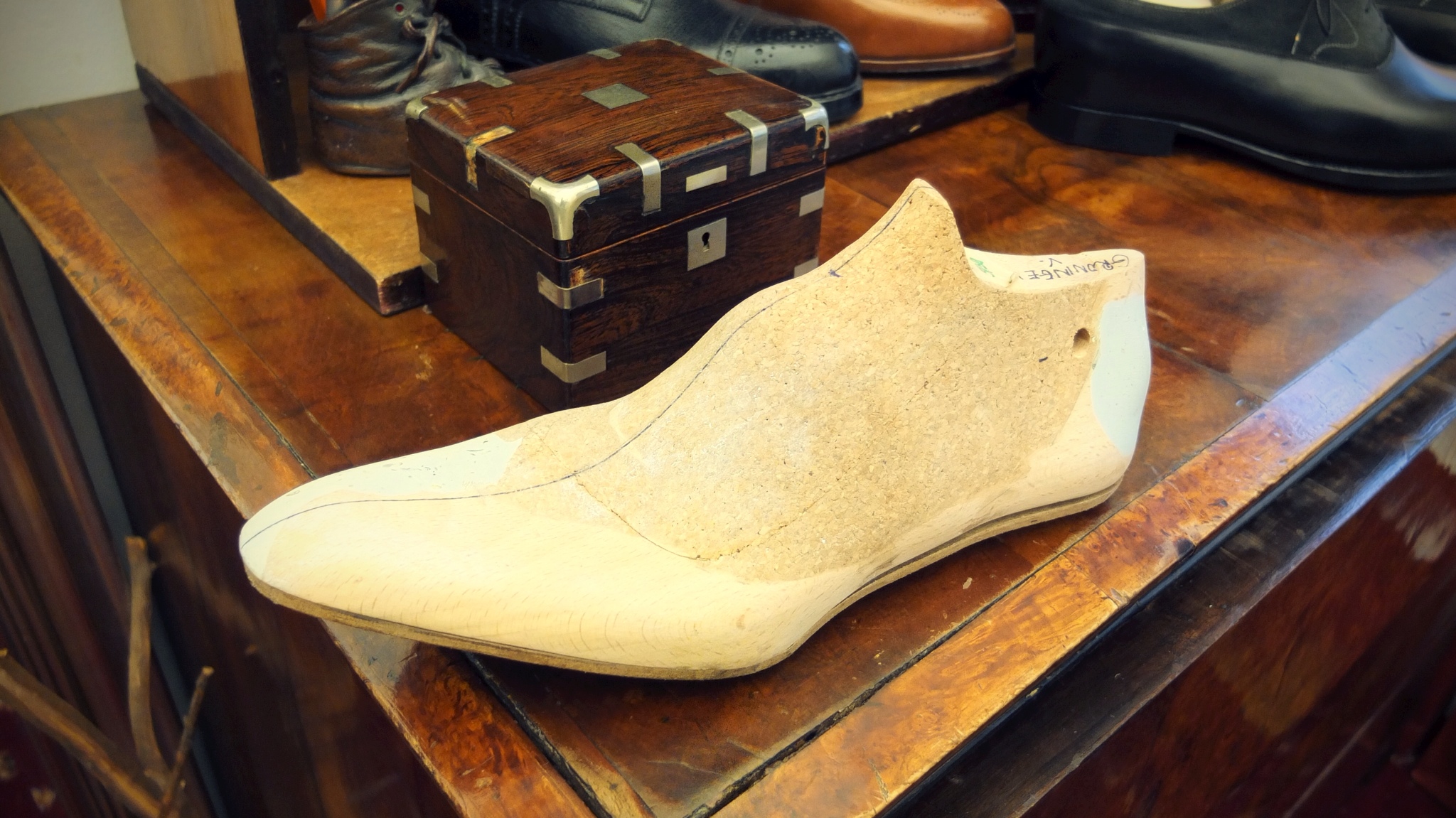 Today while popping out for supplies prior to this train trip I stumbled upon a shoe shop. Not a normal shoe shop. Bálint Masschuhe had rows upon rows of beautiful looking shoes. Timeless in style and made from leather.

Inside were meticulous mouldings from customers feet, notes, measurements and specifications highlighting all kinds of minuscule details from arch depth to how much pressure a person places on the various parts of their feet.

I got to chat with the owner and shoemaker Bela Bálint. He recently took over from his late father, the hugely respected master shoemaker Lajos Bálint. A man who’s reputation was known worldwide and was ranked among the worlds best bespoke shoemakers. 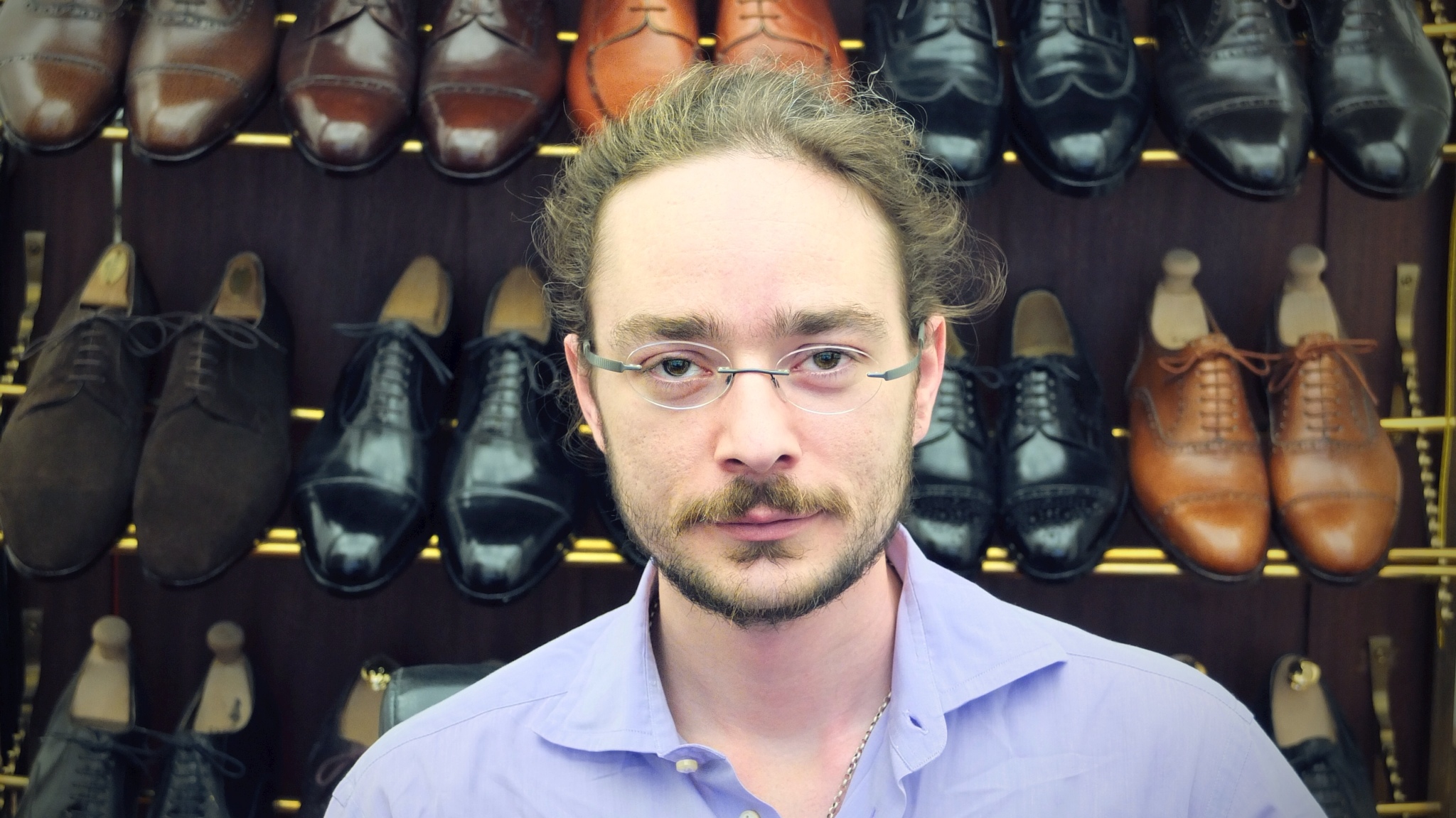 His son was obviously proud of the name his father had made internationally and it was equally obvious he felt up to the task of filling his fathers shoes. (Scuse the trite pun).

We chatted for a while and I got to see a world I thought I knew in a whole new light.

I asked Bela why people have their shoes custom made. He told me something his father told him..

“Two things in life not luxuries but absolute necessities, a good shoe and a good bed. If a suit doesn’t fit, it will not concern my health, but if a shoe or bed doesn’t fit, they will directly impact my health.”

Put like this it seems common sense. For a moment it seemed ridiculous to wander into a shoe shop and grab a close fitting shoe to wear because it doesn’t hurt.

The structure of our feet are unique. Even to each other as no two feet are the same size, even on the individual. 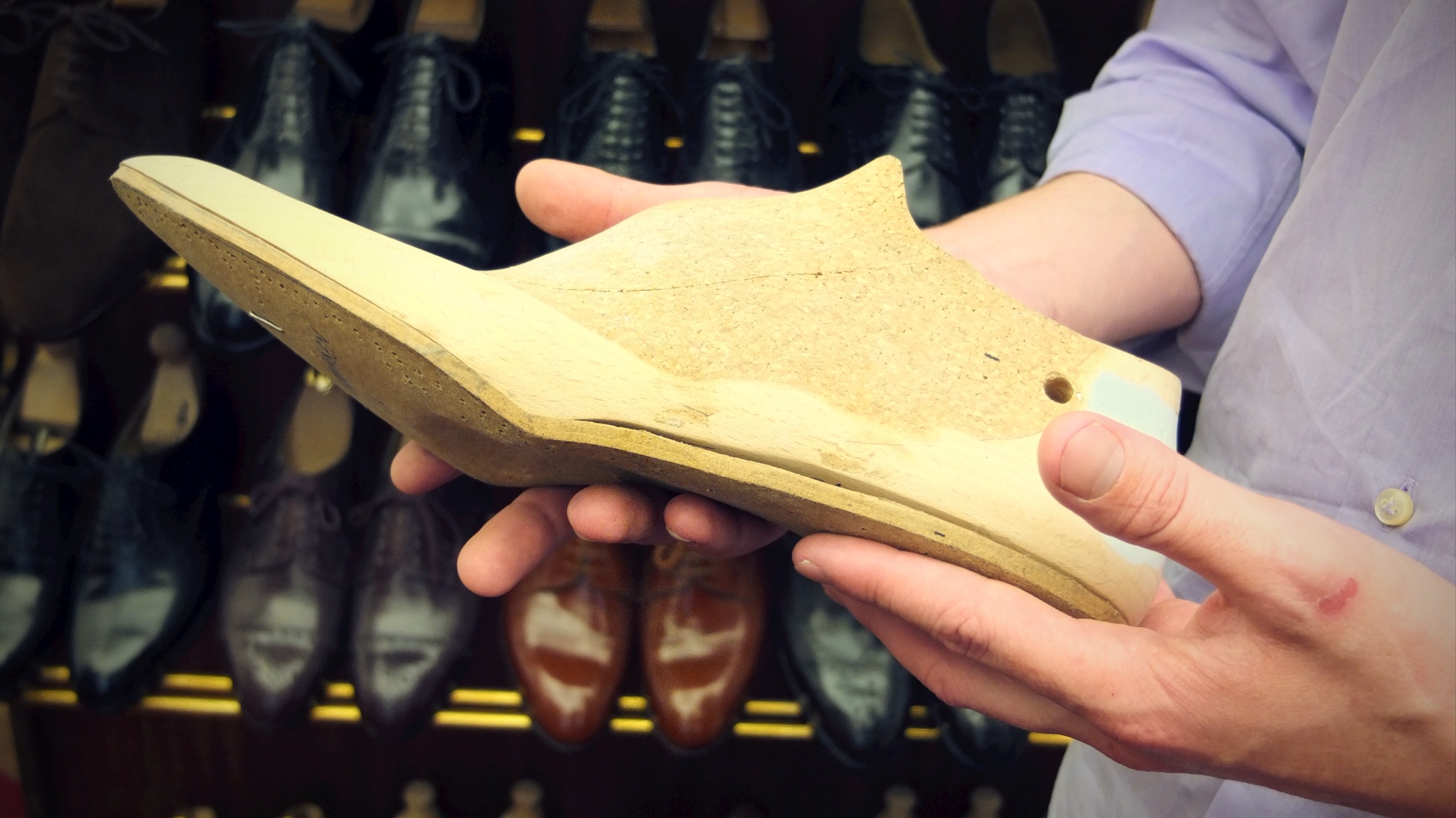 I told Bela how I had recently re-discovered the value of a good shoe but obviously my idea of ‘good’ still had a lot of adjustment needed.

He said that the shoes I were wearing we’re good for “an industrially fabricated pair”. He also said that they would fit better in a year or so.

This seemed a weird concept. Mainly because I forgot it was possible to buy something that lasts years. We live in a disposable society and I try where I can to purchase things that sit outside of fashion. Some may say unfashionable. I like to think timeless.

I learnt a lot from Bela. He looks like he learnt a huge amount from his dad. I am seriously considering buying a pair of bespoke shoes. Just once. I’m not sure I could afford to do it twice.

The wait for a pair of fully tailored shoes from Bálint Masschue can be up to 10 months from your first fitting. Add to this the cost of up to €2000 and you are looking at a serious investment over a pair of ready to wear (RTW).

That said, I’ve paid more for a motorbike that carried me less than a pair of cheap shoes before it ended up in a ditch.

I guess it’s just a matter of priorities.

I am more than a little happy with my new shoes. They may be the best I have ever owned. It’s certainly the best seventy odd quid I have ever spent. Someone once said..

“Shoes are like friends. They can support you.. Or take you down.”

Luckily, these fit better than any I have owned before and it is certainly teaching me a thing or two.

Just as well, as it will be a long while before I can afford anything bespoke. Adrienne Gusoff knew this when she said..

“If the shoe fits, it’s probably too expensive.”

If you want to hear the full conversation with Bela Bálint please click below.

Written and uploaded on an ipad. ‘Foot notes’ and links will be added to this blog later. (When I’m on a proper computer.) 😉