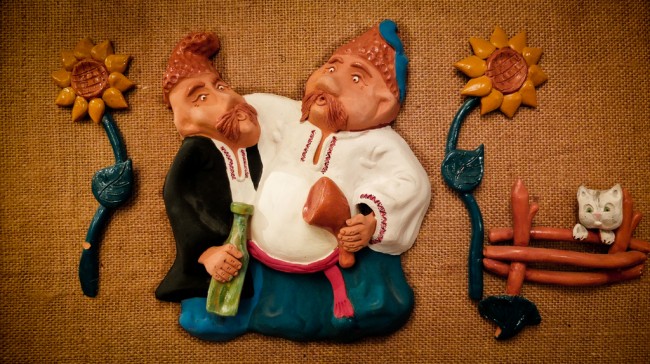 The years are mounting up this side of my Granddads death and as well as the conversational glimpses into my family history, I find myself missing the food we would eat.

He loved his food.

In his final years, housebound and slowly going blind, conversation, food and the radio were his only real pleasures. My Gran looked after the food side of things. She would cook all the dishes he enjoyed through the 50+ years they were together. Italian from her side, Ukrainian from his, and then some dishes somewhere in the middle.

The main reason for adding ‘Eat in A Ukrainian restaurant’ to my 40at40 list was to relive some of the dishes. Relive and compare. Even when I visited the Ukraine via Russia during the Russian Constitutional Crisis in 1993 I never got to eat in a restaurant. I ate on the street, on trains and with family. 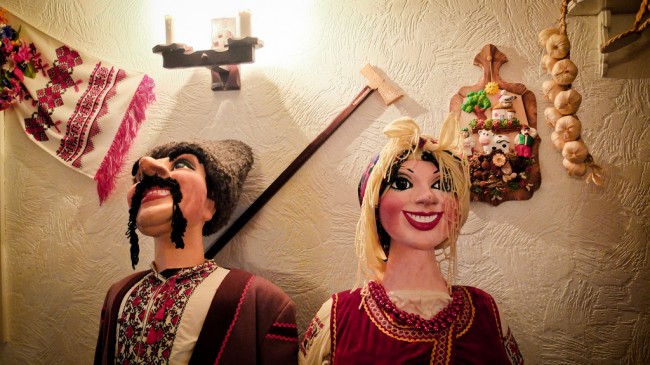 The hunt for a Ukrainian restaurant was not as easy as I thought it would be. Mainly because it appears the Ukrainian community prefer to eat at each others houses, or at the many Ukrainian societies dotted around the UK. I did think of actually visiting the Ukraine but I thought that a little extravagant what with all the other things I plan to do this year.

Luckily after a little googling and a couple of phone calls, (one to the Ukraine) I found the Albina. The only other London place listed was called ‘Divo’ and had the most incredibly bad reviews. It had also shut, luckily down. 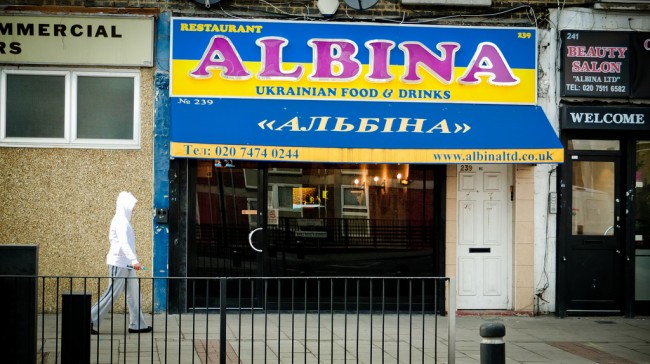 So I headed to the Albina.

listen to ‘Inside Albina, a Ukrainian Restaurant in London’ on Audioboo

239 Barking road was a short walk from the overland train. As I entered I could hear a conversation at the end of the long thin restaurant between what seemed like regulars or friends of the barman. No words I understood though. 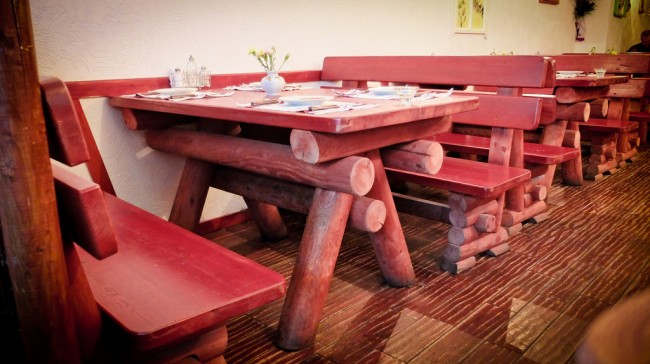 Under the cartwheel light fittings, the walls were adorned with painted plates, crockery, dolls and wooden medieval weaponary.  Windows painted on either side gave you the impression you were on the shores of a cartoon lake. I walked between the heavy set tables made of varnished logs towards the beach type bar in the bottom corner opposite the toilets. The only word the barman spoke that I understood was “Wodka?” 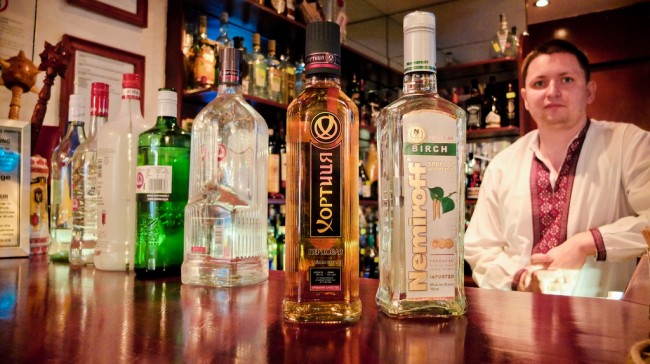 I used the universal nodding system I fall back on when anyone offers me a drink. I sampled two drinks, a peppery almost chilli laced Vodka and one made from birch sap. This was new to me but I have since learned that 12th century slavic manuscripts refer to the use of birch sap in alcoholic drink making. I’d certainly drink them again. In fact I did just that almost immediately. 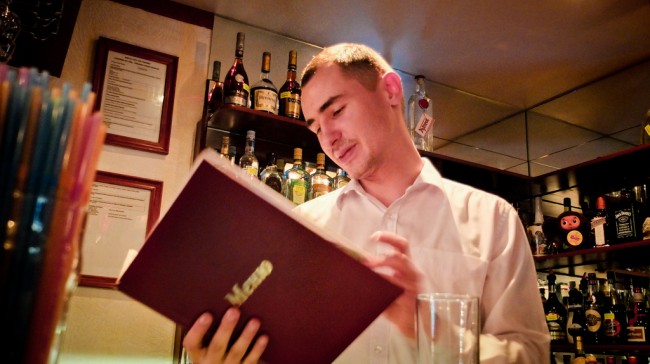 After meeting the waiter I picked a seat by the door (just in case) and ordered one of my favourite meals, Borscht.

When it arrived my hunger allowed a pause long enough to take a photo before I was overcome by the aroma and appearance. It was truly delicious. 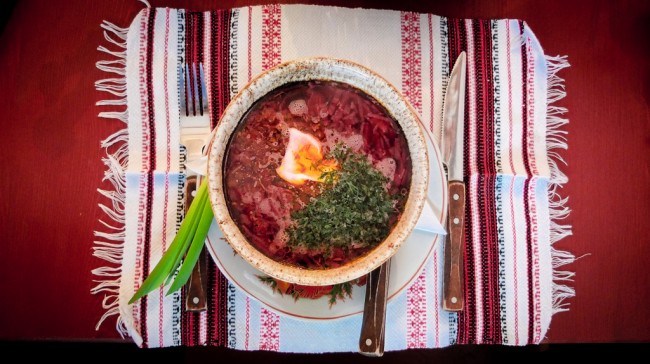 An apple juice accompanied my decision making where I had to decide between a main and a sweet or two mains. I went for the latter. I am more of a lover of the more substantial dishes and I wanted to experience as much as I could. Afterall I had no idea if I was ever to return. 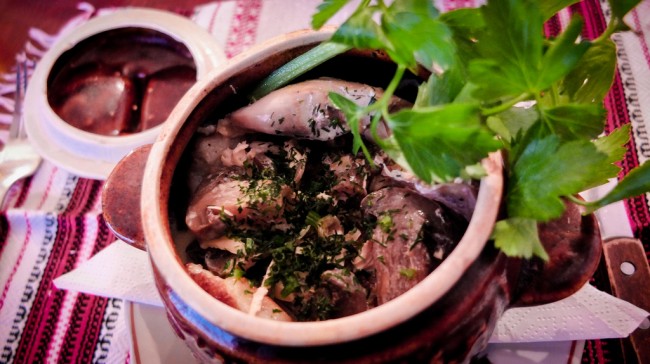 I followed the Borscht with with Draniki, a kind of shredded potato cake served with mushrooms, chicken and sour cream in a pot. I think the pot more Belorussian than Ukrainian but I could see by the clientele popping in that there was certainly fusion dishes on the menu.

My final main course was Golupsie. Minced beef, rice onion and veg wrapped in cabbage leaves and sometimes baked in a sauce. I knew this dish was to push me over the comfortably full line, but this was an important taste from my childhood and a dish that I miss very much. It reminds me of dinners with my Granddad more than any other dish. 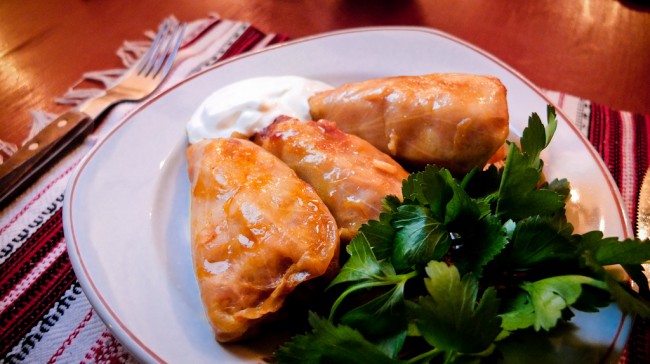 I really enjoyed my experience at Albina and am so glad I not only added this option to my list, but that I discovered this interesting and unique restaurant. The service was great and I’d love to return with friends for a proper drawn out night of food, drinking and if it’s on a Saturday, perhaps some embarrassing dance. 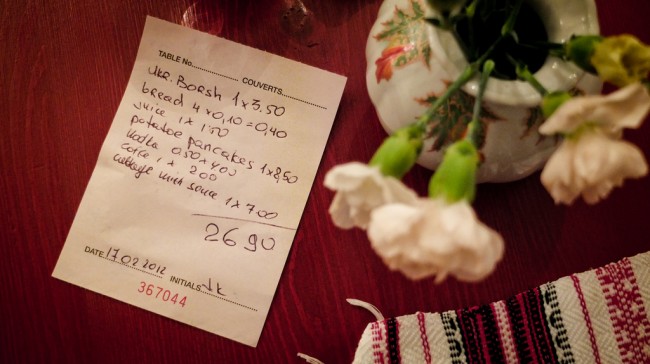 The final bill came to £26.90 as I think a few of my ‘sample’ vodkas were omitted. Wonderful value for such hearty simple foods that look more complex when cooked, presented and delivered confident in the knowledge these are great and honest dishes.

Here is some audio I recorded as I left.

listen to ‘Fit to burst. Full of Ukrainian Food’ on Audioboo 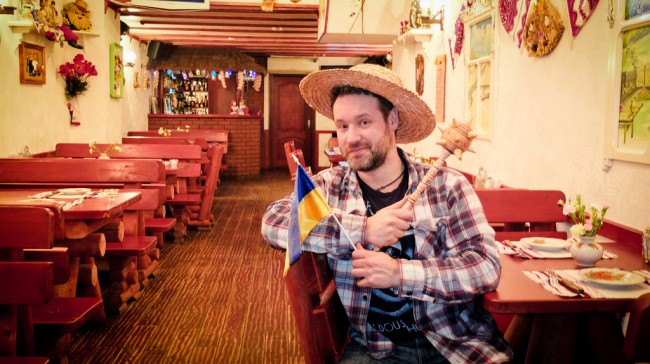 If you’d like to help me complete an item off my list please let me know. Or simply subscribe to the blog or follow the tag 40at40 to see other posts as and when I complete them. 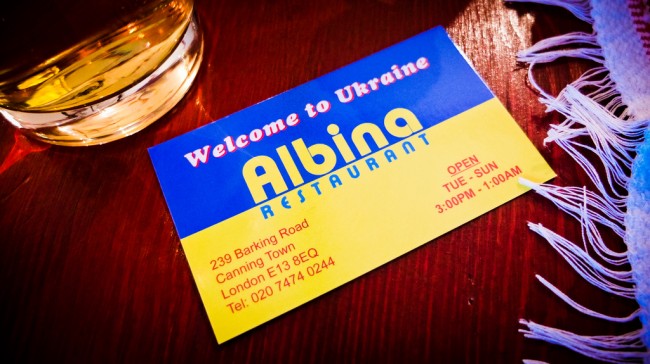