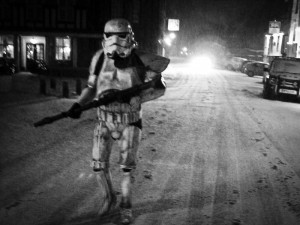 My full 40at40 list is here on OurManInside.com This blog text is taken from here

For me my ’40 at 40′ list is an excuse to do forty crazy or unusual things in a year where people think I might perhaps be losing the plot.

If it’s on a list it’s premeditated and can’t be confused with those sporadic choices we are said to make in the midst of a midlife crisis, right?

I don’t actually subscribe to the ‘midlife crisis’ model of doing something weird or different because you’re worried you may not have made the right choices when you get to a certain point in your life. I’m happy with my choices so far, but like I say… Doing 40 new things in the year I am 40 years old fits in nicely with reaching what some people used to call middle aged. I don’t think we should need an excuse to want to live life to the full. 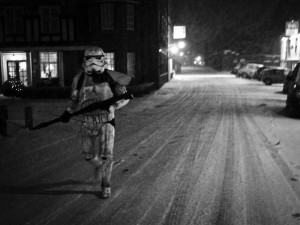 On this particular night I didn’t know I was walking into a surprise party. I had taken a good chunk of the evening building the modified Stormtrooper suit around my body. Then, necking a swift shot of whisky I headed overdressed and under-insulated into the snowy night.

Vision was limited and tinted green. For a while, all I could see as I trudged through my village streets was the small area lit under each streetlight. Blurred by the condensation building in my helmet and the growing blizzard swirling around me. 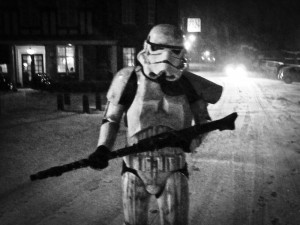 I felt cold, excited, parts of my body hurt as plastic chaffed and rubbed joints now thankfully growing numb. Yet I was smiling. A massive smile only I knew about in what felt like a movie only I could see and only I starred in.

That was until I saw the first car.

It crawled round the corner, cautious in this, the first snow of the year, and for a split second as I was noticed, the wheels locked and released. Then as the driver passed me I could see his face pressed to the glass, wearing an expression of pure bewilderment. I continued walking, smiling but turned to see he had stopped his car in the middle of the road as if allowing his brain to rationalise what his eyes had just seen. 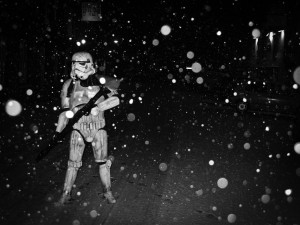 It’s quite possible the driver had never seen Star Wars. Although this was not something I had figured on. Especially when walking past a cottage window as a young boy wiped the glass to see the snow. But saw me.

I stopped and was smiling but he didn’t know that. Even through my helmet and his hand smeared window I could hear him shout “Mum! Dad!”

I thought it best I walk on. I tried to imagine how he explained me to his parents. A robot? A space man? I wondered what they thought and how long it would take the little boy to see a comic or film featuring a Stormtrooper, so his confusing encounter could finally be put to rest.

When pointing out a failed headlight to another passing motorist he went on to pass me three more times. Just to make sure. 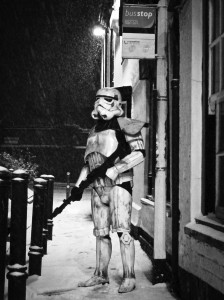 It was the strangest experience. But that’s what I was after. For a moment I was in a parallel universe. Not just because I was dressed as a soldier from a fictional one, but because on this night it snowed for the first time in a long time. On this night I was in a village where the scene I created was possibly the last thing local people would have expected to see. And on this night I had no datum with which to measure what it was I was going to experience, or for that matter what I would feel. 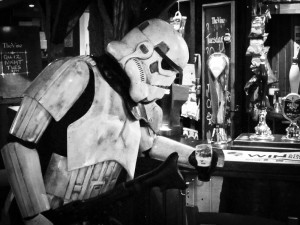 When I reached my destination I entered blind. I pushed the door to a 400 year old pub and what little vision I had was gone. My snow covered suit steamed up fully and in a few fumbled steps I was lifting my helmet to a totally unexpected roar.

It sounded like an excited “Happy Birthday!!” Shouted collectively by a group of voices as out of place in this country pub as my suit.

And just as I thought the night couldn’t get any better, it did.

(Thanks to @PaulOz for the loan of the suit and to @JaspaCycles for taking pics.) 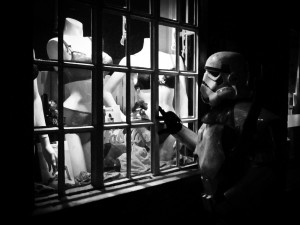