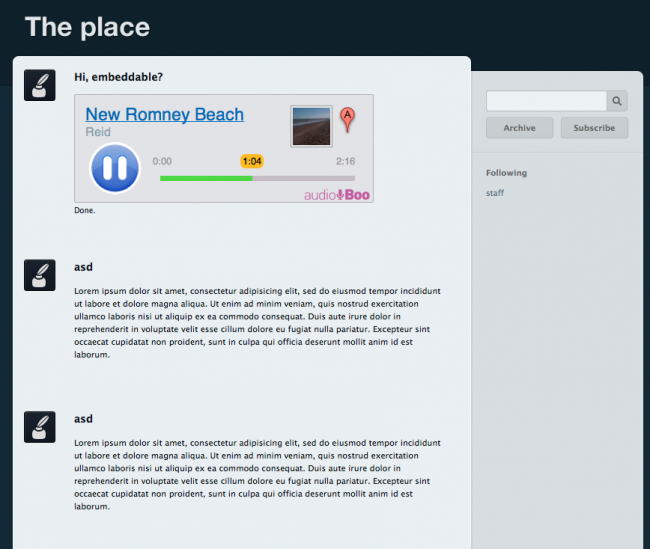 I can’t remember the amount of times I have pestered Audioboo for features I think they should implement.
They put them on the ‘special ideas board’ of which I feel I now have my own section.
Many of the ideas the community put forward seem to be implemented. Many of mine must be a bit too weird as i think they are still on the ideas board. (Like a twitter on/off option on the posting page)  I guess what I feel I need from an Audio platform may not be in the interest of the majority. 😉
Still, I got this sneak peak image of a work in progress feature they are still building and I’m sure the Audioboo crew won’t mind me sharing it here as it is due to be released next week.
For a while I have wanted a little more than just a player on my blogs and asked if it was possible for a map and image to also be a part of the html5 embed.
It looks like this is just what they are doing. Although I think I wanted fancy (and on reflection), unnecessary animation when the image appeared. I’m looking forward to seeing what happens when you click on the image and map marker and imagine it will also work seamlessly with the iPad.
As a small company running a massive platform they must be weighed under with just keeping the whole thing going. So I love the fact this new feature is on the horizon. Audioboo is still my favourite tool/platform and I don’t just want them to survive. I’d like to see them go from strength to strength.
Too many platforms (Seesmic video, 12 seconds, Phreadz) fall by the wayside tearing our content from the hearts of our blogs. Leaving gaping holes where content used to be. I’d be more than a little gutted if this happened to Audioboo.  I am sure this new embed code will go a long way to enthusing existing users and enticing more new audio bloggers into the fold.
My Audioboo’s are on Http://Audioboo.net I listen to a lot of other people’s.
Please leave a comment linking to yours if you think i’d like to subscribe.