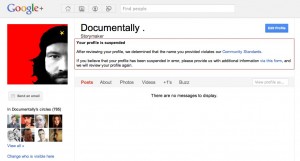 Looks like Google have finally made their way up to the letter ‘D’ and suspended my profile.
I must admit, as soon as people started to get datassasinated I slowed down on posting to plus.
It’s not that I don’t want to put my real name in. It’s just that more people know me as Documentally than Christian Payne. It’s also not like i’m hiding anything. I pretty much blog everything I do.
Vic Gundotra from Google told Scoble that Google+ isn’t asking users to use their real names, but rather common names.. Well Documentally is my Common name.
I really liked using Google Plus and was working on a presentation so that I could share my joys with anyone who wanted to know more.
Policy is policy I guess. Even if I’m an ambassador for social platforms I like. I wonder if Google ‘google’ people to find out what they do for a living before pulling the plug. I guess it wouldn’t make any difference. They’re big enough not to care.
And I was just getting my head around them not being evil.
[I have updated my post on my other blog dumbing down my initial excitement]