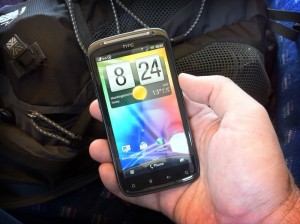 This morning I unboxed a new phone. It’s not mine. It belongs to @VodafoneUK and they sent it to test me. I’ll have to give it back but in the meantime it’s mine to explore. To see if I can use a different handset to the iPhone4 that never leaves my side.
I am already in deep with Apple and their iOS. I have used an iPhone since @SleepyDog kitted me out when they first arrived. It seemed the sensible move as all my computers are Macs.
So, during a conversation with @Dan_Bowsher he asked me if I thought I could do what I do with an Android device. I said I doubt it. Not one to miss a trick I think Dan has got me testing this (and it testing me) in time with Vodafone UK stocking a bunch of new Android devices.
I chose the HTC sensation despite it sounding like a LadyShave (or other hand held vibrating device) because it’s specs seemed pretty neat.
It seems to do everything. Check out HTC’s own site..
My first impressions were.. “Who the hell has had this phone before me?”  It looked a little like it had been smuggled across a border in a pizza. I cleaned it up easy enough and it shone.
The camera lens on the back sits in a recess and needed a little extra cleaning. I am not keen on recessed lenses on devices designed for your pocket. they tend to attract fluff and you don’t get to find out till you have missed your shot.
It feels smooth and weighty in the hand and after a charge from one of the many micro-USB leads I have dotted round the house, I popped it into my pocket until I boarded a train this morning.
I have had a little play and it seems fast. Really fast. I don’t have the instructions with me but it’s intuitive enough for basic operation. I’d love for some experienced android users to let me know some tips and tricks.. Like saving bookmarks as web apps to the screen and suchlike.
All i have done so far is use it to browse Google+ which looks neat and tidy and the screen resolution is more than enough. The phone feels a little right handed with the home button on the bottom left requiring a little more effort than I am used to to reach it.
Twitter seems to be integrated so the first app i downloaded was Audioboo followed by Gowalla. They both look ok but i’m currently travelling through tunnel after tunnel and so will have to test fully later.
Anyway. So far so good. I have yet to make any media, take a photo, buy an app (Gowalla and Audioboo were both free and no card was needed.. unlike Apple) so all the real testing is yet to come.
I still have no idea how people get their media.. i.e podcasts, music and films on their Android devices. It’s been so long sine I have had anything that doesn’t sync with iTunes. That for me will be the real test.
Coming soon…