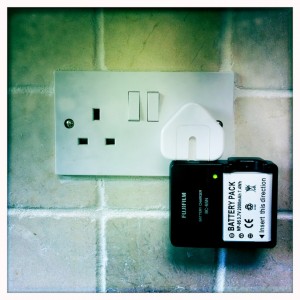 Inspired by the X100 Enthusiasts blog I have decided to marry my Fuji BC-65N battery charger with a spare Apple plug taken from an old iPod charger. This has minimised my hand luggage that little bit more and makes the Fuji X100 even more of a joy to carry around.
The battery you see charging is a copy of Fuji’s NP-95 that came as standard with the X100. I picked it up from eBay for about £5 and as it’s rated at 2000mAh. I know clone batteries are hit and miss but after three weeks of continuous use this appears to function much better than the over priced original battery and even after a couple of days casual use has never ran flat. It’s that good I only seem to be topping it up when I remember and have even bought another.
Another harder to see modification of the battery charger is adding a spot of glue under the plastic shim which appears to make the charger compatible with more than just the NP-95. The little plastic adapter was forever falling off and getting lost in the bottom of my bag. Worried it’s loss would make the charger useless with the X100 batteries i just glued it on. Job done.
I don’t think a day has passed when I don’t have the X100 by my side. It’s not a perfect camera by any stretch of the Imagination but it’s no doubt the best I own. 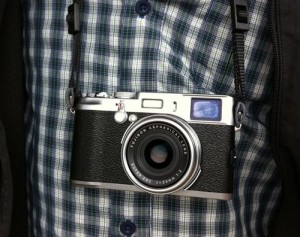