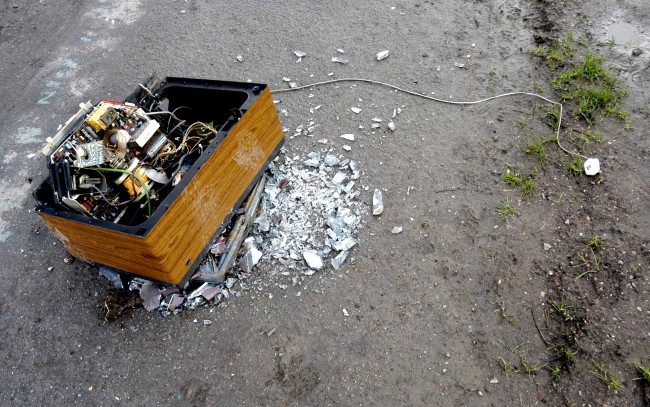 Tv is something that happens in our house. We have two sets but only one is plugged in. The other still lies packed in a box. Originally destined for the bedroom it was decided six months ago after a house move that we could do without. The bedroom was for other things. Mainly sleep.

The TV in the living room is a 30 something inch, black, shiny, HD affair that is used more as a monitor than a portal to timetabled programming. If it were an actual monitor, it would have the necessary internet devices perminantly plugged in and the screen could really come to life. As it is it force feeds us a limited schedual of programs it thinks we may like to watch.

If it’s my finger turning it on, it’s to temporarily pacify our 2 year old with some psychedelic kids show. Occasionally it plays a DVD that somehow found it’s way into the weekly shop. Very rarely, on special occasions, it displays what the Xbox plays.

I’d rather it not be there. It’s  often turned on by others for background noise and that’s just what they get. Noise.

Sometimes, like last night, I’ll walk into the noise with a plate of food and witness a science programme showing me something amazing I have never seen, I have never known. Quite often this is delivered to me by the BBC and I think, “I paid for that… Money well spent.” This happens about twice a year.

All my news, entertainment, current affairs and education comes to me through the other screens. The iDevices and laptops strewn around the house.

There are eleven other screens in my home. Each one individually more valuable than the biggest one sat in the corner. Five of them are multi-touch. Two of those belong to my little boy. He thinks the big one in the corner is broken. The greasy marks he makes as he swipes the screen are always followed by a “Daddy fix it.”

“I’m afraid Daddy can’t fix it” I tell him. And he goes back to my old iPad, his new toy. His window to another world. Today I heard him mutter.. “TV is broken.”