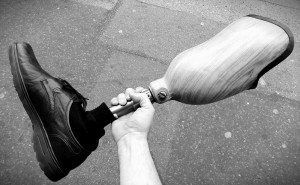 I just met a guy called Ernie on platform 4, Peterborough station. We got talking about his leg. Or rather his artificial leg.

Last July he tripped over a flowerpot. That’s all. Not a landmine, or road accident, or an altercation with farm machinery. A simple accident in the home that got complicated. Less than a year later he is proudly showing off some serious tech. Carbon fibre meets aircraft aluminium meets flesh. He hadn’t taken long getting back onto his feet. And now that one of them wasn’t real he seemed kind of proud of it. He asked me to guess how much it cost. I said £1500. Only £34,500 short of the actual price. He let me hold his leg to feel the weight. I won’t lie.. A very very small conscience-free part of me did think about running off with it. In a split second it wasn’t the “how the hell would I eBay this?” thought that stopped me. It was the.. “It’s not fair, he can’t chase me thought.” I gave him his leg back as the train pulled in. The 99.95% of me that did not want to rob his shiny £36,000 tech.. massively respects him.