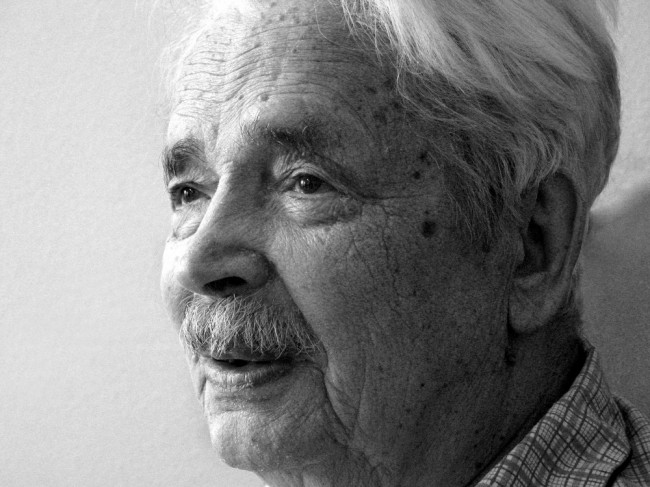 After moving house I now find myself surrounded by boxes that had recently been stashed away in an attic.

In one box was a BSAF 90 minute cassette tape. The label had only one word.. ‘Granddad’.

I had the feint recollection of recording my Granddad singing but wasn’t sure.  So this week I bought a Walkman from eBay for £9 and have just been taken back in time.

My Grandfather died on the 14th of August 2003 and towards the end of his life I spent a long time sitting and talking with him. Trying to find out as much as possible about his past.

He told me about his Father Trofin Podolak, an officer of the Tzar, dying in a prison for being anti-Communist. About how he never got to see him before he died but managed to get him some clothes smuggled through a prison guard. He doesn’t know how his Father died or where and if he was buried.

He told me of his own times in prison. Three in all. All of them German POW camps. Every time he escaped.  Once in transit by jumping from a train. Once when he asked a guard if he could wander past the fence and collect some clean fresh snow to boil for water. He kept on walking. His walk turned into a run and he was soon in the trees bullets zipping past his head. The last time he escaped was from in front of a firing squad. Everyone was told that if they agreed to wear the German uniform they could go free. My Granddad was the only one that agreed. He stepped aside and all the others died. He then told the commander he would only wear the uniform of a fireman. He would only save lives. Not take them. And this is what he did.

Many of the darker stories he was reluctant to share. It took me years to get a glimpse of his past.

When he defected and arrived as a refugee in the UK, he adopted a Polish name and for a while hid his Ukrainian origins. He met my Italian Grandmother Ofelia in Coventry and without speaking a word of each others language, they fell in love and married

He worked as an electrician and for years as a car park attendant at the Odeon in Coventry. One of the best presents I ever got was from his time there. An unlimited cinema pass.

He was a proud man. An emotional man. He loved poetry, music and books. For many of his later years he was housebound. He had fallen from a roof at the Odeon and damaged his leg which got steadily worse. He loved his job and the people he worked for, so never dreamed of asking them for any kind of compensation.

Years before he died he also lost his sight. The doctors said it was because of a much earlier hit to the head. He put is down to his horse riding antics and recalled a time he was knocked from his mount by a tree branch.

So it was in his last five years, while he was blind and in a wheelchair that this recording was made. Too proud to venture outside, for people to see him disabled, he would listen to a shortwave radio to the German, Italian, Russian, Polish, Uranian and English news. He understood it all.

I had just got a personal stereo that had the ability to record. I’d intended to document some of my band rehearsals but thought I’d first test it on my Granddad.

Also in the room at the time was my Brother Daniel. We were eating toast and my Grandmother was popping back and forth from the kitchen, obviously feeling left out, reminding me that I was to take her to town.

As far as I know this is the only audio recording of my Granddad in his 91 years.