(photo by Phil Sands) A friend of mine who is part of a new photo agency, Makoto, wrote to me from Damascus the other day in need of emergency help with an ailing website.To cut a long story short, he needed a new mechanic to open the bonnet of the the agency's stalled site and get it started again. He emailed me, I dropped out a tweet and within two … END_OF_DOCUMENT_TOKEN_TO_BE_REPLACED

I was reading about 'The Fined Tuned Universe' when I came across Puddle Thinking. Imagine a puddle waking up one morning and thinking, “This is an interesting world I find myself in, an interesting hole I find myself in, fits me rather neatly, doesn’t it? In fact it fits me staggeringly well, must have been made to have me in it!”   This is such a powerful idea that as … END_OF_DOCUMENT_TOKEN_TO_BE_REPLACED

I have a Nokia Booklet 3G on loan from 1000 heads but was having issues with such a beautiful device running an operating system I've not touched for years. In stepped @Computid Über geek, and in a couple of days he had installed Mac OSX. The background story is linked here... http://su.pr/1hsIfN How how did it is listed and the downloadable PDF is linked … END_OF_DOCUMENT_TOKEN_TO_BE_REPLACED 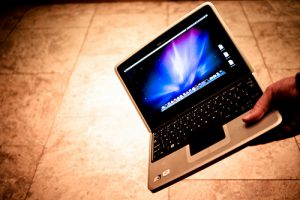 Today, the Nokia Booklet 3G on loan to me from @WhatleyDude and 1000 Heads just increased it's usefulness ten fold. Maybe more in fact, as so unaccustomed have I become with Microsoft's OS, any device running a version Windows turns me into a temporary luddite. I'm not a coder and come from a photography background. I'm afraid 'I am a Mac' through and through. When James handed me Nokia's … END_OF_DOCUMENT_TOKEN_TO_BE_REPLACED