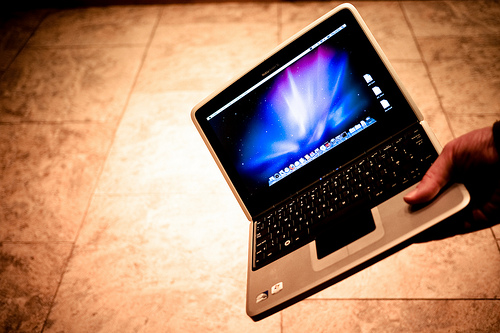 Today, the Nokia Booklet 3G on loan to me from @WhatleyDude and 1000 Heads just increased it’s usefulness ten fold. Maybe more in fact, as so unaccustomed have I become with Microsoft’s OS, any device running a version Windows turns me into a temporary luddite. I’m not a coder and come from a photography background. I’m afraid ‘I am a Mac’ through and through.
When James handed me Nokia’s Netbook I could not help but want to look over it. It’s certainly as sexy as a piece of Apple hardware but with Windows inside I felt like I had in my hands on a beautiful yet sick bit of tech. It was as if Windows itself was a virus and this foxy bit of kit needed to be cured.
At the Northampton Geek Meet the ‘proper’ geeks were all over it. They new the language of Gates and were mightily impressed. I felt even more that I needed to feel at home with this device. To make it my own as such.
Enter @Computid. I call him a kid genius. If he wasn’t using his powers for good he’d have had the front door of his Mum’s house kicked in by the ‘Men in Black’ a long time ago.
If they could find him.
This is a Kid who is rebuilding a multi million dollar Cray super computer.. because he can.
Adam told me if the Nokia Netbook 3g was hackintosh-able, he could do it. A few days later I called him and he had.
It’s now in my hands looking like Steve Jobs himself had got into bed with Nokia to create a funky little mobile computer that behaved like a netbook should. There are still a couple of creases in the code Adam is planning to iron out but I’d go out and buy the Nokia booklet tomorrow knowing that this was possible. Follow @Computid on twitter and he will link to a full set of instructions enabling you to create your own Nokia Hacklet.
I’ll also tweet the link to full instructions at @Documentally
…………………………………………………………………………….
Great article from @ColtSeaversPS http://bit.ly/9nOy9t