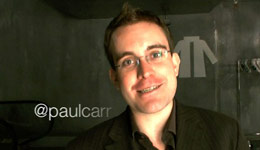 When I told people I was to be sat on a panel with Paul Carr from the Guardian a couple responded.. “Paul Carr? He’s a bit of a dick.”

“What makes you say that?” I asked.

Fair enough I thought, but when I met him he was just frank and very funny.

The video of the panel we did at the #140conf is floating around somewhere in the ether. I may even drop it in a blog soon.

What I have here in the mean time is a brief conversation with Paul at the end of the day. We were on the way out the door and both of us had cold beer on our minds. That’s probably why this is not so much an interview as a chat in a corridor over a conference when what we really wanted (and had later) was a chat over a beer.. well away from the conference.

There is more about Paul Carr on his Wikipedia page..

This video was filmed with the assistance of Matt (@barnstormed) and is also on the Open University You Tube channel so go view it there and show some love..