I’m so glad my parents were hippies. Without that fact, my musical upbringing would not have been a diet of the likes of Bob Dylan, Johnny Cash, Leonard Cohen, Joni Mitchell and Melanie.

One of the first sounds I heard was needle on vinyl and my first memory was gazing out of the window of a Welsh farmhouse to see silhouettes dancing around a bonfire playing acoustic guitars and singing.

The day I was born Melanie was also celebrating her birthday and had already performed at the Isle of Wight Festival and at Glastonbury Fayre, before it was even called a festival.

I think it may have been the constant comparison to the singer Melanie that may have made my mother pick up the acoustic guitar. She was a big fan and although she didn’t have the greatest singing voice, it didn’t stop her joining in on all of Melanie’s songs word for word.

Last night my Brother and I took a trip into Leicester to a little venue called the Y Theatre to watch Melanie play. If my Mother, Liala was alive today, she would have been there too.

It’s a small intimate venue perfect for one woman with a guitar. As it happened she was also accompanied by her son, Beau Jarred Schekeryk, an incredibly competent guitarist himself.

Her Son opened with some fantastic gypsy style flamenco guitar. He certainly added something to the style and listening to him you would think he’d grown an extra two fingers on each hand.

He apologised for arriving jet lagged as they had just flown in from Korea. I didn’t notice. His  delivery was laid back and chatty, great guitar music.

After a little while Melanie herself came on in a flowing dress, a different lady to the album covers that decorated my childhood but the same incredible voice, uniquely hers with the power to reduce me to tears in a single song. A song that I love but that thankfully She left out of her set.

Two hours passed too quickly as old favorites once heard at classic moments in time like Woodstock were punctuated with new material that could have been written at the same time.

Too many artists grow out of the magic they encapsulated and evolve into tired crooners. This is one thing that amazed me more than anything else with Melanie. How could this rare surviver of the Summer Of Love still be writing truly great songs after 40 years in the music industry. These weren’t tired, rushed or trite. Her new material seemed written by the same passionate young girl of the 60’s, it’s just that now you believed she knew what she was singing about.

Two days ago I had been at the ‘Radio 1’s Big Weekend‘ and although a great day in the sun, I felt the music certainly lacked something. I felt the artists were delivering me a product. That none of them believed what they were saying. It was without soul. Some person, singing some song, about some thing. 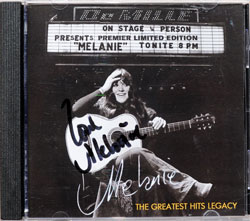 Melanie’s music filled in all the gaps for me. She believed in these songs.. That she has written.. That she now was singing.. And i believed her.

I admit, this kind of heartfelt folk isn’t for everyone. Once it’s produced with accompaniment on an album you need to know the singer and their words to get the best out of it.

This kind of live performance though, should be seen by everyone. Just the bare bones of a singer/songwriter who has been there and done the work. An honest exposure of the soul through nothing but guitar and voice. With her Son by her side it had the intimacy of a family moment. Many of the people in the audience have known Melanie and her music since before I was born. I guess if you count my time in the womb, so have I.

I am sad that my Mother never lived long enough to see this gig, to see that it was still ok to be a ‘sincere hippy’.

As Melanie sang the song ‘I Tried To Die Young‘.. I was so glad she didn’t.