Am I asking too much to want my cake and eat it too?

The black Nokia N95 8GB is my third new phone in as many months. The first a sony K850i was sent back as it’s user interface (UI) turned out to be too weird and fiddly with the Vodafone firmware. The LG Viewty bought from Hong Kong was sold on as I didn’t realise it didn’t have wifi and my latest tool/toy the N95 seems to be the mother of all phones.

I have only had it a day or so and am pleasantly blown away at not only the UI but by all the apps floating around out there.

The only issue that arose on day one was the realisation that the ‘Unlimited Data’ package I was sold by Vodafone was infact limited to 120meg.

Hang on.. let me pause for a moment so you can realise just how ridiculous that is.

The Nokia N95 8GB prides itself on being able to use Vodafone’s lightning fast High Speed Downlink Packet Access (HSDPA). Vodafone brags that their network can handle up to 7.2Mbit/sec.

So if my maths serves me correctly, on a connection running the mythical top speed of HSDPA, my entire monthly data allowance would last me around 17 seconds.

This is hardly what I would call unlimited. Especially when T-mobiles Web and Walk offer up to 3GB and an Iphone on O2 offers true unlimited data (albeit at 2G speeds).

So this morning I looked at my data-crippled phone as it chomped at the bit aching to behave as it was bred and decided to call Vodafone.

I got myself a huge double scoop of coffee and dialed 191 expecting to be listening to some old pop track for an hour. Less than a minute later and I was talking to a human called Amy. This was a bit of a shock as I always remember Vodafone as being a nightmare for keeping people hanging on the line.

Within a few minutes she agreed that I had been duped into an unlimited contract that was nothing of the sort. She said 120 meg is nothing and that she would upgrade me to unlimited at no extra cost. I was in shock. This was all to good to be true. I asked for her to email what she had said just so I had it on file.

I can only imagine that I wasn’t the first to raise this issue and infact Trading Standards were in fact breathing down the necks of this mobile giant ordering them to make things right.

I was a very happy bunny and the call ended with me thinking all wrongs had been righted and that I was going to have to eat my previously harsh words in this very blog post. 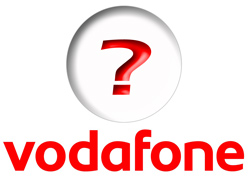 Twenty minutes later I still had no confirmation email and while mid call to a friend the phone cut off. I thought nothing of it. Perhaps he was driving and dropped the signal.

When it looked like I was not going to get an email I picked up my mobile and dialled 191. No connection. All I got was the error tones. I called a landline… The same tones.

I could not believe it. I had been cut off.

Luckily I have a land line handy so I could call Vodafone customer services.

Within a few minutes, with the assistance of another advisor we had ascertained that Amy had assigned to my phone a data card tariff which had cut my phone services off. WTF.

Not only that, but the tariff I have been on for the last few years is now unavailable to me. I was only kept from migrating away recently because I could keep my pretty decent free minutes and texts with free weekend calls to both landlines and mobiles! They blocked me out from it and now I am not allowed to get back in! Surely they are in breach of some kind of contract here…

To cut a long and stress filled story short… Vodafone have buggered up my contract and stomped on any faith I had left in them. To top this they have absolutely nothing bigger than 120 meg for on-the-phone data and I think this is just ridiculous. Especially when T-Mobile offer 3gb on an unlimited (fair use) tariff.

Vodafone‘s offerings are hardly cutting edge. Why advertise spangly new ‘VMI’ (Vodafone mobile internet) if all it is good for is downloading a few email headers and surfing wikipedia in the pub quiz?

So, the way things stand at the moment are they are offering me an extra 100 mins a month making it 300 free minutes to any landline, 500 free texts, Vodafone ‘stop the clock’, which means after the first three mins on a weekend and every evening I can talk for an hour at no charge. On top of this they will give me £30 credit on my account and a free month of the £7.50 bolt on data tariff to see if I like it.

This is the absolute best they could offer me. The only thing I really wanted is a few mins and a decent data tariff, which they don’t/can’t give me. They can’t even give me my old tariff back.

I seriously think that Vodafone are missing a trick here. If they really thought 120 meg was enough for anyone why not have the confidence to offer 1GB a month or even 500meg for starters? Why not put their meg where their mouth is.

Today mobile phones should enable us to leave our laptops at home. They have the capabilities to run a multitude of apps and stream data from cameras with decent resolutions. Never-the-less, some of our mobile network providers (namely Vodafone) seem to want us to stay in the dark ages.