I am a Twitterholic, that is I use the application ‘Twitter‘ every day. I joined a while ago but wanted a different name so deleted and started again. I am now here to stay. I have met some great people and find it my favorite social networking site. If you have never heard of it, then Wikipedia explains it as such:

Twitter is a free social networking and micro-bloggingservice that allows users to send “updates” (text-based posts, up to 140 characters long) to the Twitter website, via short message service, instant messaging, email, or an application such as Twitterrific. Twitter was founded in March 2006 by San Franciscostart-up company Obvious Corp. Updates are displayed on the user’s profile page and instantly delivered to other users who have signed up to receive them. The sender can restrict delivery to those in his or her circle of friends (delivery to everyone is the default). Users can receive updates via the Twitter website, instant messaging, SMS, RSS, email or through an application.

In addition to that outline I found these two decent articles.. Article one and Article two.

Due to Twitter’s success, a large number of sites imitating its concept have sprung up around the world. There have also been a number of other sites cropping up utilizing a mashup of twitter profile details and pictures. TwitterPoster.com is one of these sites.
It is basically a montage of twitter posters avatars sized relative to the numbers of followers each member has and how many posts they make.

As soon as I saw it I thought, Hey up.. If people actually give a damn about appearing on this site we will soon see an influx of posters posting crap for the sake of it and people trawling for followers in a myspace type ‘please love me..add me as a friend’, kind of way.
Luckily this hasn’t happened.. Well not in my circle of Twitter friends.

TechCrunch said TwitterPoster is pretty but not much else and although I would like to see a little more statistical information mixed in with a little more imagination, I still was inspired enough to create my own spoof…

This is how I see TwitterPoster…

As TwitterPoser.. (i.e. Look how big my avatar is.) 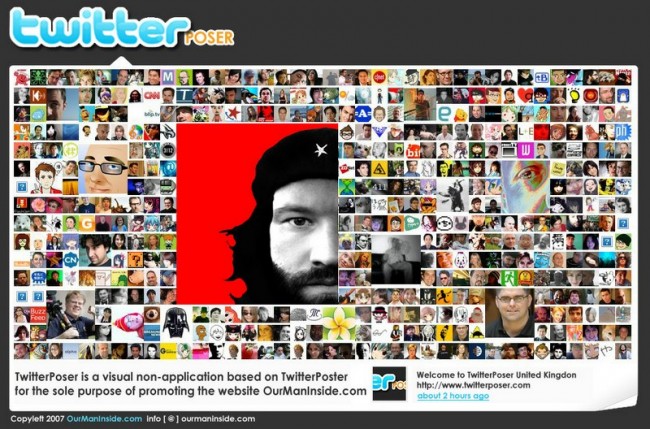