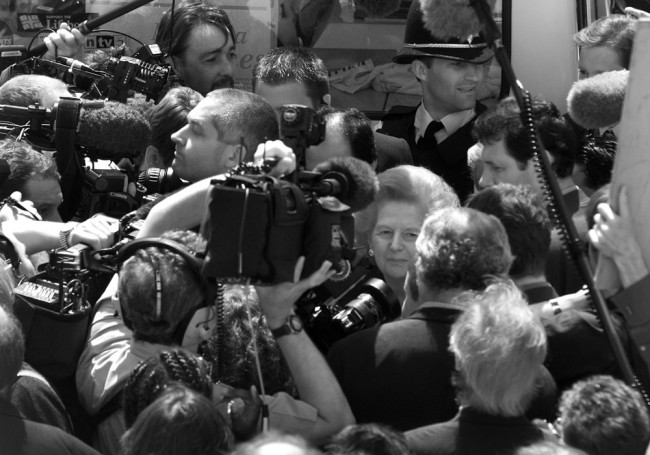 I was still the new boy at my local regional paper in Northamptonshire. I had been head hunted after three months at a weekly paper after one of the photographers saw me jumping across the roofs of canal boats trying to get a clear shot of actor David Suchet.

As I was the only person at the paper aware I had absolutely no qualifications in photography at all, I was still trying to prove my worth.

Always short staffed and short on equipment, the paper had sent all the available photographers down to Northampton’s famous old market square to cover a walkabout by the then Ex-Priminister Margaret Thatcher.

With an old battered Canon digital and two lenses, I knew my options for a decent view were limited and set about looking for a spot to shoot from. Walking around the market I spoke to a few of the stall holders and found out that a couple had been visited that morning by sniffer dogs. I figured it was a safe bet they were scouting out her route and told another photographer I was going to get a better view from a window over looking the square.

He seemed pleased at this idea as everyone of us was out to get their picture in the paper and he seemed to think that with me stuck up and out of the way, it would leave him with the best shots.

It was all about who’s picture got in and with a brief as wide as ‘Show the chaos’, it was anybody’s day.

Of all the windows on the square, I chose the second floor of a pub, ‘The Moon On the Square’ or something. Well I figured it could be a long wait so why not grab a beer in the meantime.

I had a comfy chair, a half opened window and had chosen the only lens I could use at that distance, a 70-200mm f2.8.

So, there I was, beer in one hand and camera in the other with a view over the whole square. I won’t go into all the parallels I was thinking about, that revolved around a similar window with a view in a certain book depository. But yes.. I did feel a little like I imagine a sniper would.. Waiting for his ‘mark’.

Just as I was thinking if the police had actually thought about checking upper windows a black Jag pulled up on the edge of the square and out of nowhere press, TV, close protection units and members of the public swamped it.

As if the crowd were one swirling beast it swayed and morphed it’s way across the square on more of a float-about than walkabout.

My camera was to my eye, I couldn’t see an old lady with big hair. Just suits and cameras, ear pieces and furry microphones.

Then, as they had moved across and in front of me I saw her. Just a flash of pale face in a chink in the crowd.

Just the one shot, but I felt that excited rush when you know you have caught something close to what you were after.

Looking at the back of the camera I had what looked like a little face in a crowd. Not really the award winning photo I had in my minds eye, but with a shrug and a gulping down of the last of my beer I decided it would have to do and headed out into the street.

Down the stairs, out of the front door and straight into the mass of people rolling as one across the square. The people were packed so tight I could not even raise my camera.

I decided to duck out, squeezing myself through the throng and behind the counter of a vegetable stall. The people who owned it were the same that I had spoke to earlier.

Just then a really strange thing happened. Appearing right in front of me, like a little old lady after pound of mixed veg, was Margaret Thatcher holding her handbag and a bunch of flowers. Was this really the woman that tainted the 80’s and brought so much misery to the people of Britain?

She looked as if she were about to ask me a question. Then she clocked my camera and perhaps to disarm me, she held out her hand.  I took it, and as I shook I looked into her eyes.  She had a grip built up by years of greetings and a million hello’s.. and a look in her eyes that… Well it wasn’t pleasant to experiance and I think I recoiled. Truly strange. And more intense a look that I  have since seen in the eyes of other former world leaders.. 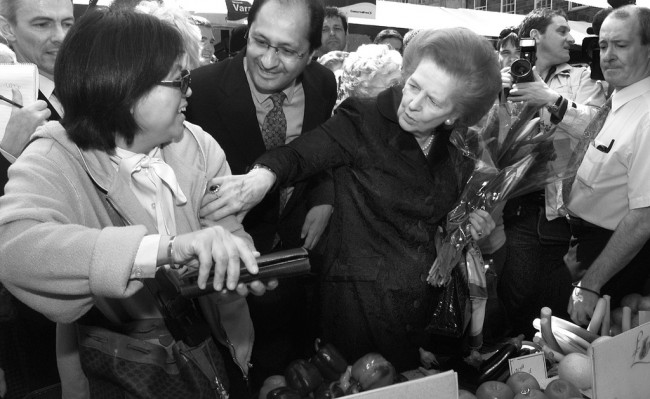 I was left momentarily stunned. She moved on to have a staged chat with the owners of a store and I took a couple of photos that looked as if she were hassling some shopper oblivious to her presence and just trying to grab a bargain amidst the chaos.

Then thankfully she was gone. As quick as she had arrived. Leaving everyone to carry on as normal. I headed back to the paper to file my photos as no doubt the afternoon was calling with it’s cheque presentations and other anticlimaxes.

The next day I arrived at work to see the photo department standing round the paper. Looking over shoulders to see the cover I saw my photograph unashamedly pasted across the front page. I couldn’t help to smile the kind of smile you know would upset others. But i did.. and it did, just as the editor walked by and slapped my shoulder. “Good work” he said. That was a lot from him, and the others new it.

I felt I had arrived.