Director Stephen Simms has really delved deep into someone’s nightmares to produce a really creative adaptation of Georg Buchner’s 1837 tragedy Woyzeck. And if you head over to the Ron Barber Studio at the Crescent Theatre Birmingham between the 24th and the 27th of this month, you can see it for yourself. 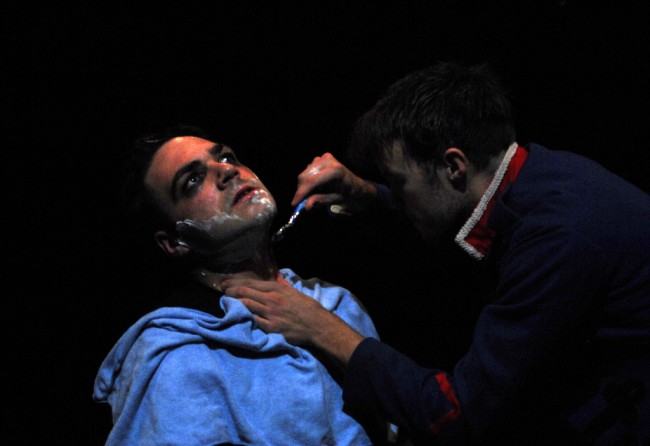 So last night I was sent to photograph the Birmingham School of Acting’s depiction of the troubled life of 30-year-old Franz Woyzeck, a servant, ex-soldier and obsessively jealous lover who is enraged by his common-law wife’s infidelity.

The set design was minimalist on first glance but soon became filled with props and half human-half animal machines i really hope i won’t be dreaming of in the next.. well ever really.

I was ready for the darkest set i have ever had to photograph, but in reality, although on the edge of what my camera and reflexes could handle there was a great use of light. It seemed to always appear just in the places needed but not as invasive as your standard spot or flood. This meant you were drawn around the play from mood to mood, corner to corner as the actors played to every space of the room in more dimensions than i have experienced before. 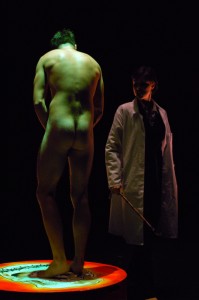 Coupled with the occasionally introduced smell… (yes there are scents used to set the scene too) and I was really transported into the emotional turmoil set in a twisted expressionistic landscape and an insight of how human obsessions can lead us away from our rational side. Such was the performance a picture of madness that I actually had to go back stage after and see if the actors were infact sane, normal individuals… You can tell I don’t go to this kind of theatre much.

Music, dance, song and breathtaking acting almost stopped me from doing my job as occasionally i would lower my camera, transfixed, sucked into the emotional eddies being played out before me. No wonder people are getting bored with the insipid triteness of the TV. This is where the real acting is. Sorry if this is not a revaluation to others but I have always been a once a year pantomime kind of guy. Not any more. I would go to watch these guys play anything. It was heart and soul performances from all of them.

So if you haven’t already guessed it.. I highly recommend Woyzeck. A twisted depiction of class versus morality, madness opposed to enlightenment and a tale of a downtrodden individual manipulated by the upper-class only to eventually lose his mind and commit murder.

I can get my hands on few free tickets if any of you guys out there would like to go and experience this evening of wonderful yet disturbing theater.. Just email or call at my normal contact details.

Warning- Contains nudity and scenes of a violent and sexual nature. Not suitable for children. 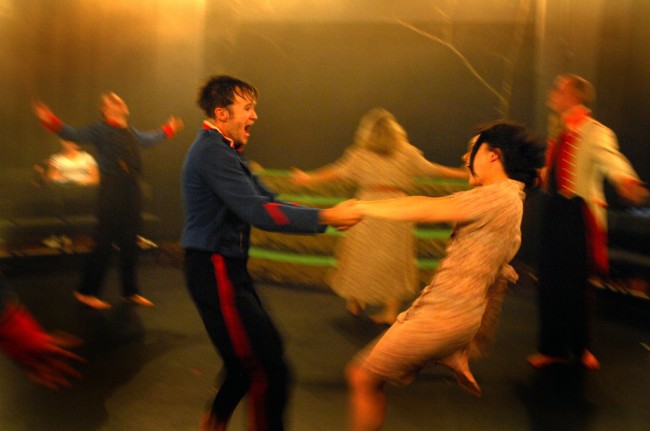