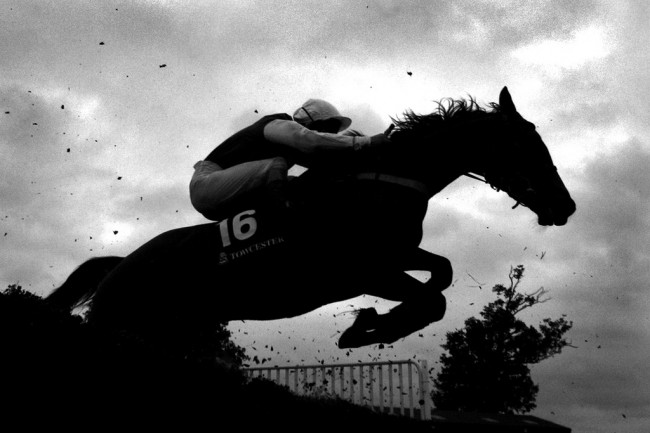 It was my first day shooting horse racing for the Northamptonshire Chronicle and Echo. If the truth be known it was my first time ever at a horse race.

The only reason why I had been sent to cover the race day at Towcester racecourse was that all the more experienced ‘snappers’ were shooting rugby and football matches.

New to the newspaper and still relatively fresh to photography I really wanted to make good of this job. Being the new boy at the paper I had the oldest Canon digital camera with the most battered of lens’s and as everyone was doing the big pitch sports, I was left to fend for myself without a long lens.

Those amateur photographers out there that think the papers have all the latest and greatest kit, think again. The budget to purchase anything photographic for a regional daily more preoccupied with it’s advertising department.. Well the words blood and stone come to mind.

I would see fathers of kids at the local Sunday football match with better kit that we had. And they new it. Smug gits. Still i was getting paid to take photos and mostly enjoying it too.

So there I was, spying the other photographers photographing for their perspective publications and clients, trying to see where best I should be to grab that one shot my paper needed.

It was and probably still is about getting the one shot. A tight, clean well composed image that says all they have to say to illustrate the day. Any more pictures and you eat into valuable advertisement space.

Looking around everyone was ‘long-lensing’ it. The only other guy that had a camera with a wide on had set it up on a remote control in the ‘danger zone’ just after the jump. While he could fire off some frames from a safe distance, looking down at the jump through 300mm sports zoom, he could also trigger the camera close to the jump.

So between races I crossed the course and plonked myself down under the jump, a few inches course-side of the rail and waited.

I wasn’t sure how i was going to get my photo as I couldn’t see the horses approach. Also, as there was such along time between laps and races and such a short time between the list of other jobs i had scheduled for the day, it soon dawned on me that I had one shot only.

Looking back I am amazed we ever managed to do our job any justice. We would have a long list assignments spaced half an hour apart with at least 25 minutes of driving time between. As soon as we arrived and pressed the shutter, we would be saying our thank you’s and goodbye to a stunned subject on this, perhaps their biggest day.

They may well have single handedly rowed the Atlantic in a tin bath, but all we could give them was five minutes as you knew the next job was already waiting.. This would either be a photo of an innocuous looking car for an advertisement feature, or other hard news like an over flowing recycling bin.

So there I was crouching and looking across to the other photographers waiting for my cue.. I had decided I would watch to see them all simultaneously lift they long lensed cameras to their eyes hope for the best.

Suddenly, as the cameras came up to the eyes, so did mine. I felt a rumble in the ground beneath my crossed legs. Louder and louder.. And then it stopped. At that split second I pressed the shutter and took one shot. The seconds that followed saw me covered in raining dirt and turf.

Looking at the back of the camera I saw my one picture and smiled. But only for a moment. I loved the moment of power I felt I’d captured, and the composition, but as far as a typical sports.press shot, it didn’t tick any of the boxes. It was almost a silhouette, but not quite. The riders face was obscured and the colours were so muted it was pretty much black and white.

I thought, Sod it. I had captured the moment exactly as I would want to remember it and at the end of my day I filed it with my other pix and thought If they like it they will use it. If not then there would be plenty of other sport to cover.

The next day there was a special pull out sports section and on the front was my photo. The sports editor even took me aside and said thank you for ‘thinking outside the box’.

I think it was the first time a black and white silhouette had been used on the front.

The lesson I learnt that day was lost to me until recently. Sometimes as photographers on deadlines, with clear briefs and formats to follow, we get stuck in our ways offering clients exactly what we think they want. It’s almost too easy to play it safe.

Why not shoot what the client wants and then do what you want. Then hand the lot over and see what happens. You never know, that image you think is a little bit out there.. that breaks a few rules.. may also be exactly what’s needed.