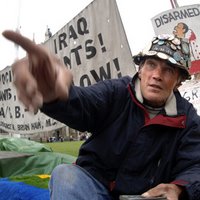 Not an anti war protester but a peace campaigner. Meet Brian Haw, A hobo hero that demands you listen to what he has to say.

For five years he has slept outside the houses of parliament under a piece of plastic. He tells those with the power things they don’t want to hear. Tired and horse he has upset the government so much, they created a law just for him.

Reluctantly famous he sits on his island and conducts interviews with the world on his mobile phone. At the same time in Mexico priests throw bricks at the windows of radio stations in an attempt to quiet his harsh words.

Listen and watch the mpeg

Listen to the mp3

Want to include my promo in your podcast? you can find it HERE